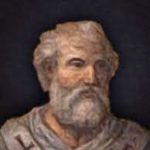 Pope Saint Boniface IV served as the head of the Western church and bishop of Rome from the year 608 A.D. until he died (615 A.D.) during a difficult time for Italy and Western Christendom. Having served as deacon during the reign of Pope Gregory I, Boniface took encouragement from his mentor and ran the Lateran Palace like it was a monastery. While pontiff, he encouraged the practice of monasticism, transformed the Roman Pantheon temple into a church, and addressed the state of the English Church. The Catholic Church made him a saint with a feast day that is celebrated today on May 8th.

Boniface IV was born to a doctor named John in the south of Italy in today’s Abruzzo (modern day L’Aquila province). The Liber Pontificalis states that his family came from Marsi origins. During the papacy of Pope Gregory the Great, Boniface received appointment to be a deacon in the Roman Church. In this role he was also the dispensator who administered the patrimonies (revenues and lands connected with the Holy See).

Some accounts state that Boniface received instruction as a student of Pope Gregory. After the death of Boniface’s predecessor (Boniface III), the church in Rome chose the new Pope Boniface IV. The office of the papacy remained vacant for nine months while the church in Rome waited on the customary imperial confirmation from the Eastern Roman Emperor in Constantinople.

Boniface IV carried out a few important acts while serving as the pontiff. He appealed to the Eastern Roman Emperor Phocas for permission to transform the pagan Roman Pantheon temple into a church called Sta. Maria Rotunda. Emperor Phocas granted the imperial consent, and the Pantheon became the first converted pagan temple (to a Christian facility) on May 13, 609 A.D. As part of the transformation process the church supposedly moved 28 cartloads full of sacred Christian bones from the Catacombs and transferred these to lie under the high altar within a porphyry basin.

Pope Boniface IV also held consultations with the London Bishop Mellitus in the year 610 A.D. concerning the needs and state of the church in England. At the Council of Rome that Boniface held that same year they addressed these issues as well as restoring the discipline of monasteries. According to historical tradition Pope Boniface sent St. Mellitus back to London with instructions and letters addressed to the Archbishop St. Lawrence of Canterbury and also to the southeastern regional King Aethelberht of Kent (who was also the overlord of all Anglo-Saxons living south of the Humber River).

Conflicts and Challenges Facing the Papacy of Pope Boniface IV

During the pontificate of Pope Boniface IV his reign was challenged by several problems. The heresy of the Monophysites caused the bishops following it to work with Eastern Roman liberators who came under the leadership of Exarch Heraclius of Africa. Boniface also became embroiled in a controversy arising from the Second Council of Constantinople held in 553 A.D. The church sect of Nestorianism had been condemned by the council, but not everyone agreed with this ruling. The famed missionary from Ireland Abbot St. Columban criticized the pope for backing the decision against Nestorianism adopted by the church council.

Plague, famine, and various natural disasters also marred the papacy of Pope Boniface IV. The pope finally retreated into a monastic lifestyle within his own household in his last days. When Boniface died his successor Pope Adeodatus I abandoned Boniface’s policies that encouraged monasticism.