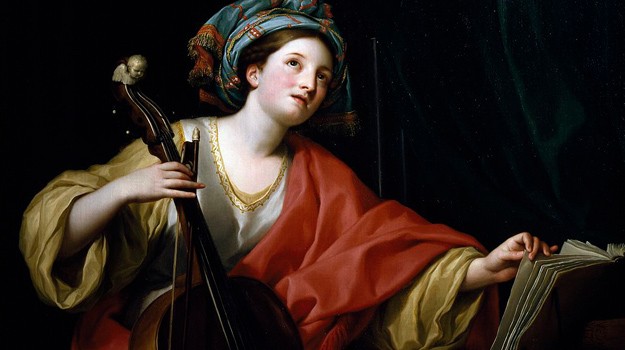 St. Cecilia, patron saint of musicians, first appeared in the list of Catholic saints sometime in the fifth century, very likely the year 496, when Pope Gelasius named her in his book Sacramentary. Later, in the year 500, a church in Rome was dedicated to her.

She was never officially canonized because the process of canonization didn’t originate until later in the 12th century. Instead, she was made a saint through the process of her martyrdom. Despite not becoming a saint until the late 400s, her name was known before that time thanks to a Greek religious romance published and circulated in the area.

The book begins with Cecilia and Valerian and their pure, virginal love and ends in Cecilia’s martyrdom. It stood out among other romance novels at the time because they were full of sensual, sometimes carnal, romances. Cecilia, though, was virginal and pure. She was very devout and close to God and spent much of her time praying.

Despite coming from a very wealthy family, she wore sackcloth against her skin. She spent her time fasting, praying and invoking angels, saints and virgins in an effort to protect her virginity. Her parents promised her to a wealthy young man named Valerian. On her wedding day, she confessed to Valerian that she’d taken a vow of virginity and that an angel was helping to protect her and her virginity.

Valerian, eager to be with his wife, asked Cecilia to show him the angel as proof of her honesty. She told him he’d be able to see the angel for himself after visiting the third milestone on the Appian Way and being baptized. Valerian traveled to the milestone, and Pope Urbanus baptized him. Afterwards, he came back to his wife and did, in fact, see the angel she had told him was protecting her.

Tibertius, Valerian’s brother, spoke to his brother after he returned. He believed his brother’s story and was baptized himself. The two brothers then decided to spend their lives burying murdered saints. During this time period, saints were being murdered daily by Turcius Almachius, the prefect of the city.

After they had been burying the saints for some time, they were called before the prefect, where he demanded that they sacrifice to his gods. They refused, and he had them killed.

During this same time period while the men were burying the dead, Cecilia preached to the masses. She brought 400 converts to the faith in her time preaching, and Pope Urban baptized most of them. After the men were arrested and killed, Cecilia was arrested as well. She was condemned to die by suffocation in the baths.

The guards locked her in for an entire night and day. They stoked the fires so that the baths were not only suffocating but also intensely hot. After 24 hours of this, they checked on her, and she had not even broken a sweat. When they told the prefect this, he sent an executioner to cut off her head.

The executioner tried three times to cut off her head, but each time, his blade failed him. The blade cut her, but it would not decapitate her. Instead, she was left alive but injured for three days. The people came to her, and she prayed for them and preached the word. They collected her blood until she finally died on the third day.

Pope Urban buried her. At this point, she was martyred for her beliefs and regarded as a saint forever after.

Cecilia also stated that she “heard heavenly music” in her heart on the day she was married. For this reason, she is regarded as the patron saint of music and is often depicted holding organ pipes or standing or sitting near an organ.

Years later, in 1599, officials of the church exhumed her. She was dressed in a golden dress and covered in a silk veil to protect her face and modesty. The church officials said they smelled a delicious floral scent when the coffin was opened. They examined her and found that she was, in fact, virginal and pure. She was the first pure saint the Catholic church had ever had.

Looking through her veil was also seen as an act of holy reverence. After that, they stopped all further examinations of her body, and it was moved to the church named after her in Trastevere. She was placed beneath the high altar and the church of St. Cecilia was rebuilt by Cardinal Paolo Emilio Sfondrati.