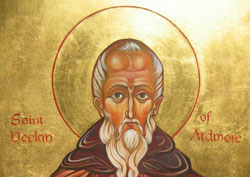 Born in Drumoe, near Cappoquin, Declan of Ardmore hailed from a wealthy family. As a young man, he set sail for Rome, where he was personally taught by the pope. After returning to Ireland, he met fellow Irish minister, Saint Patrick.

Even though Saint Declan preceded Saint Patrick in their shared mission to bring the gospel to the Ireland, he deferred to Patrick’s authority. Upon receiving Saint Patrick’s blessing, Declan began to share the message of the gospel with the native inhabitants of Ireland.

Among his missionary work, Declan is also credited with introducing the grain, rye, to Ireland. However, it should be noted that this is mostly based in tradition, and may not be completely true.

Declan died peacefully and was buried at his monastery in Ardmore. The path he walked from Ardmore to Cashel in County Tipperarry is today preserved and known as Saint Declan’s Pilgrim Path.

Every year, pilgrims from all over the world visit Ireland to walk Saint Declan’s Pilgrim Path and pay their respects to the man who helped spread the gospel to the Celtic islands.

Today, Saint Declan is the patron saint of the Déisi. The Déisi were a class of people in ancient Ireland who worked as vassals and paid rent to a landowner. Later in Irish history, Déisi came to refer to individual septs, or families.

Regardless of his patronage, Saint Declan is known and loved today for his role in bringing Christianity to ancient Ireland.
According to some sources, Saint Declan was among the first to spread the gospel in the Emerald Isle, predating even the famous Saint Patrick. Most of the information available on his life and works comes from a Latin Life written in the 12th century, more than seven centuries after Declan lived and died.

For his work in spreading the gospel and working with other pre-Patrician saints to help preach the good news of Christ’s life to the inhabitants of ancient Ireland, Saint Declan is revered today as a messenger, and evangelist, and someone who worked tirelessly to spread the Lord’s word.