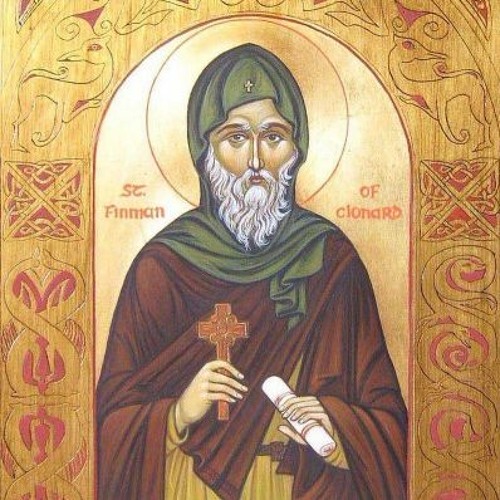 Also known as Saint Finnian of Clonard, St. Finnian was from Ireland and one of the first men from that country canonized by the Catholic Church. Many credit him with starting the monkhood in Ireland.

Finnian of Clonard was born circa 470 in eastern Ireland in an area known as the Kingdom of Leinster. Based on early descriptions of his life, historians believe he was born and grew up around the town of New Ross. His father, Findlog, belonged to an older tribe of people in the region called Clanna Rory. Finnian would spend very little time with them as his father gave him to a bishop in the hopes of giving the young boy a better life.

After a few years of living with the bishop, Finnian traveled to Gaul to learn more about the Church. The time he spent there did him well and led to him studying in Wales. Finnian felt an affinity for Wales and decided to remain there for many years to learn from his elders. Some records show that he stayed there for three decades before moving back to Ireland.

Most remember Finnian today as a teacher. The King of Leinster was so fond of him that he gave him a small tract of land to build a new school. Finnian began with one building that he used for classes but later created a community that people came from other regions to attend. Unlike other religious teachers at the time who lived in large and impressive buildings, Finnian lived in a tiny cell onsite where he believed that he had everything he needed.

Founder of Monks in Ireland

The small cell where he lived showed others that they did not need a lot of possessions and led to Finnian becoming the founder of the monk movement in Ireland. Many of the men who trained under him would return to their hometowns and establish monstrosities similar to the one Finnian created. More than 3,000 men trained with him at a time.

As the Church has no records regarding his birth, historians are unsure of his age. Many believe that he was somewhere between the ages of 60 and 65 when he passed away. Finnian was one of many people stricken with the plague who did not recover. Some records show that he continued teaching and helping others in need until his final days. The Diocese of Meath considers him their patron saint.