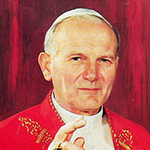 Pope John Paul II was a Polish man who held the position of pope for 34 years, making his papacy one of the longest in modern history. In that lengthy amount of time, he was hardly one to stay still. He was said to be the most recognized person in the world. He was, by far, the most traveled pope in the 2,000 year history of the Church. This article intends to highlight this man’s life before and during his time as leader of the Catholic Church.

Karol Józef Wojtyła was born the youngest of Karol Wojtyła’s and Emilia Kaczorowska’s three children. Emilia was a teacher who died when Karol was just eight years old. While his sister died prior to his birth, Karol was quite close with his brother Edmund, a physician who eventually died from scarlet fever.Karol was fond of sports, especially soccer, where he played as a goalie. Due to the closeness to Wadowice’s Jewish groups, school soccer matches would frequently break down into Jews versus Catholics-Karol would routinely play for the Jewish side.

In the middle of 1938, Karol and his father moved from Wadowice to Krakow, where he enrolled into Jagiellonian University to study language. While he engaged in compulsory military training within the Academic Legion, he refused to fire a weapon. He also participated in theater, writing several plays.

Karol spent 1940 through 1944 working odd jobs to avoid deportation, suffering a concussion, fractured skull, uneven shoulders and a permanent stoop in the process. His father died of heart attack in 1941, leaving him the sole surviving member of his family. Karol did not consider serving God until his father’s death. After reaching out to the Bishop of Krakow in October of 1942, Karol studied in a secretive underground seminary while also doing his best to stop himself or anyone else from being captured by the Nazis during events like Black Sunday. After the Nazis fled the city on January 17th, 1945, Karol helped reclaim the ruined seminary and his restoration efforts earned him the commendation of “Righteous Among the Nations” for his constant efforts to help the Jewish community, including sequestering a two-year-old boy with a Gentile family.

Career With the Church.

Karol was formally ordained, after completing his studies, on November 1st, 1946. Pope Pius XII appointed him Auxiliary Bishop of Krakow on July 4th, 1958. October 1962 would see Karol influence the policy of Vatican II. January 13th, 1964 would mark the day Karol became Archbishop of Krakow. June 26th, 1967 would be the day Karol would become Cardinal of San Cesareo in Palatio.

John Paul II was against apartheid, the death penalty, homosexuality and abortion. He also favored enshrining religious rights within the EU and the theory of evolution, with the exception of the human soul-something he felt that only God could be held responsible for.