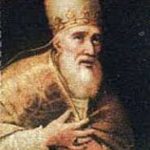 Pope Sylvester I had the distinction of being the 33rd reigning pontiff of the Western Church in Rome. During his long and eventful pontificate of from 314 A.D. to 335 A.D., the dawn of the Christian era Roman Empire began under the rule of Emperor Constantine the Great. Despite the fact that Sylvester was one of the ten longest reigning pontiffs in the entire history of the Catholic Church, precious little has survived about his personal story, background, and rule. In the Liber Pontificalis primary source (of the late 600’s A.D. to early 700’s A.D.) the work states only that he received gifts for the church in Rome given to him by the Emperor Constantine I.

Brief History and Background on Pope St. Sylvester I

Pope St. Sylvester I and His Papacy

Massive churches became constructed and funded in the papacy of Pope Sylvester I. Among these were leading centers of Christian worship including the Holy Cross Basilica in Jerusalem, St. John Lateran’s Basilica in Rome, the original St. Peter’s Basilica, and a number of other churches which were constructed over the martyrs’ graves.

Ironically for such an important figure in the contemporary church, Pope Sylvester did not go to the famed and critical First Council of Nicea of 325. At this early universal church conclave the Nicene Creed was originated. The pope had two legates named Vincentius and Vitus who represented him at the meeting, and both were treated with honor though they did not preside over the event. The pope later gave his official approval to the decisions of the council after the return of his legates.

Among the Symmachian forgeries is included the Vita beati Silvestri that was preserved in Syriac, Greek, and Latin. This apocryphal account of a supposed Roman council includes extra-historical tales of the close personal relationship enjoyed by Pope Sylvester I with Roman Emperor Constantine I the Great. These legendary accounts are contained similarly within the forged Donation of Constantine.

Pope St. Sylvester I and His Lasting Legacy

The eternal idea of papal supremacy stems from a fictitious account of the Sylvester and Constantine relationship. In the subsequently devised Gelasian doctrine, the pontiff’s authority guides the imperial powers as written in the Donation of Constantine in the 700s. According to this (now universally recognized as forged and fictitious) account of events, Pope Sylvester I cured Emperor Constantine I of his leprosy through the baptismal water that the pontiff personally administered to the emperor.

Per these same legends, Emperor Constantine was so grateful that he went far beyond affirming the role of the bishop of Rome as elevated over all other church bishops. The emperor supposedly even removed his imperial insignia to walk in front of the horse of Pope Sylvester while acting as papal groom to the pontiff. In exchange for this gesture, Pope Sylvester I offers his good will in the form of a crown to Constantine who then chooses to turn over Rome to the pontiff and move the imperial seat of power to Constantinople in the East.

Pope Sylvester I constructed a church in which he was subsequently buried upon his death on December 31, 335 A.D. The location of his remains was in the St. Priscilla (on the Via Salaria) church in the cemetery. In the year 762 A.D. Pope Paul I moved Sylvester’s relics over to the San Silvestro in Capite basilica.

St. Sylvester I was born to a Roman father called Rufinus.

St. Sylvester I is typically pictured with a dying dragon beside him.

Pope Sylvester is included in the list of top ten longest reigning popes for his time in the office of 31 years, 11 months, and one day (or 8,005 days)

The feast days of St. Sylvester I are celebrated on December 31 in the Western Church and on January 2 in the Eastern Christian Church.