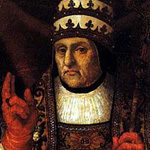 Pope Callixtus III was the 209th pope and the last man at this point to choose that name. He was a member of the Borja family and served as pope for more than three years. This article will look at the early and later life of Pope Callixtus III.

Born in 1378, the future Pope Callixtus III grew up in Canals, which was part of the Kingdom of Valencia. His parents were Juan Domingo and Francina Llancol who later had four daughters. They had him baptized in Xativa in Saint Mary’s Basilica. Known as Alfons de Borgia, he attended the University of Lleida and studied logic, arts and grammar before earning doctoral degrees in canon law and civil law. While listening to Vincent Ferrer, who would later become a saint, Alfons expressed interest in working for the Church.

Once Alfons heard his calling, he became a delegate and worked with the Diocese of Lerida. This would lead to him working as a rector for San Nicholas and then becoming an administrator. While working with the Kings of Aragon, he decided to become a cardinal but did not receive an official appointment. He finally became a bishop in 1429 and later a cardinal priest.

During the papal enclave of 1455, the cardinals responsible for picking the next pope were divided between two men. To compromise, they elected Alfons as the new pope. He chose the name Callixtus and quickly became known as a pious man. In support of the crusades, Callixtus ordered that the Church ring bells at the same time every day and asked that followers pray to support those at war. He also canonized Saint Vincent Ferrer, the same man who helped him find his place within the Church.

One of the main things that Pope Callixtus III did was order a new trial for Joan of Arc. This trial ended with her found innocent of the crimes once leveled against her, which some credit with helping her become a saint. Though Callixtus III did not appoint her a saint, he appointed three men in addition to Saint Vincent as saints. Several decades after his death, some historians claimed that the pope issued a papal bull that excommunicated an early viewing of Halley’s Comet because he believed it was a bad omen.