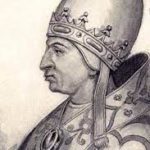 Pope Celestine III was the 175th pope and known for ascending to the throne while still a deacon rather than a cardinal. Despite his advanced age, he reigned for more than six years. This article will look at the life of Pope Celestine III before and after the papacy.

Before becoming the pope, Celestine III was a Roman man born into nobility. Though his birth name was Giacinto Bobone, he was part of the Orsini family. Known for his knowledge of Spain, he worked as a legate and went on two trips to the country. The first lasted from 1154 to 1155. On his second trip, he remained in Spain for three years. He would later become a cardinal deacon.

Giacinto became pope with little opposition from other factions. His papacy began on March 30, 1191. The day after his election, the Holy Roman Emperor Henry VI arrived in Rome and officially crowned him the pope. As part of his election, the Emperor agreed to give control over the ancient city of Tusculum back to Rome. Pope Celestine III was 85 when he took over the throne.

Pope Celestine III immediately fought with the King of Sicily due to family matters. The King kidnapped Empress Constance who was both the pope’s aunt and the wife of the Holy Roman Emperor. He threatened to excommunicate the Sicilian King if he did not release the woman. Soldiers working for the King brought the Empress to the border and let her go, though it took several months before she made her way back to Rome.

After reigning for more than six years, Celestine III was 92 and looking forward to stepping down from the papacy. Not only did he discuss resigning, but he even named the man he believed should be the next pope. Cardinals working for the Church refused to let him resign though. He passed away from natural causes near the beginning of January in 1198.

*He was born circa 1106 in Rome.
*The future pope had the birth name Giacinto Bobone.
*He died on January 8, 1198.
*Celestine III was elderly and wanted to retire from the papacy. The cardinals refused to let him resign, which led to him continuing his papacy until his death from natural causes.
*His papacy began on March 30, 1191.
*The papacy of Pope Celestine III ended on January 8, 1198.
*He was succeeded by Pope Innocent III.

*Pope Celestine III was part of the Orsini family, which includes two future popes: Nicholas III who reigned from 1277 to 1280 and Benedict XIII who reigned from 1724 to 1730.
*He was known for his official motto, which translates to “Go in Thy Path.” Celestine III believed that everyone should follow their paths.
*Celestine III was one of the only popes in history who was appointed as a deacon and not a full cardinal. He was ordained as a priest a few days after his coronation and ordained as a bishop the next day.
*During his reign, Pope Celestine III oversaw a situation where a woman married a second man. She married her first husband when they were both Catholics. He later left the faith and entered into marriage with another woman, which led to the first wife taking a second husband. Celestine III ruled that since her first husband was no longer Catholic, their marriage was void and that her second marriage was valid.
*The pope wanted Cardinal Giovanni di San Paolo to succeed him, but the Church appointed Innocent III instead.