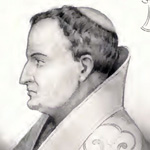 Pope Eugene II was the 99th pope and reigned from 824 to 827. He narrowly became pope as a group of Roman citizens sided with another man. This article focuses on the time Eugene II reigned as pope and some of the documented information about his early life.

Born around 780 in Rome, Pope Eugene II used the name Eugenio as a child. He was appointed a cardinal priest in 816 and served in Santa Sabina. Elevated to the position of cardinal later in the year, Eugenio was a quiet man and known for his support of the Franks.

Pope Paschal I, who would later become a Catholic saint, passed away in February of 824. He was known for limiting what the Roman nobility could do and for reducing their power in the city. After his death, the nobility looked for a man who would change the former pope’s policies and allow them to have more power. They chose Eugenio with Abbot Walla giving him his full support. A group of Roman plebians selected a man named Zinzinnius who they thought would continue the policies of Paschal. Though nobles had no votes in the election, their overwhelming support led to the election of Eugenia. He then chose the name, Pope Eugene II.

Pope Eugene II is best known for the council he called in 826 to talk about church discipline. He condemned simony, which was an act in which clergy and others could purchase positions regardless of their experience. The council also stated that those appointed to the clergy must learn about their positions and develop the education necessary to hold those roles. Those who failed to do so risked suspension of their duties.

During the more than three years that he was pope, Eugene II launched efforts to restore several churches in the city and make them more beautiful. He earned the nickname “Father of the People” after issuing a decree that provided resources for children, widows and other poor people in Rome. After his death in 827, Emperor Louis released coins with the pope’s image on the front.