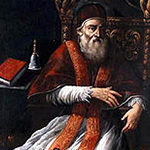 Pope Paul IV (1476-1559) was born Gian Peitro Carafa. His papacy lasted from 1555 until he passed on in 1559. During his papacy, some of the Papal States were invaded by the Spanish military. In response to this, he used the French military as a mercenaries.

Since Italy was already in a war with the House of Habsberg in Austria, Pope Paul IV didn’t want to start a second one with Spain. As a result, the Papal States made a treaty with Cave, Spain called the Treaty of Cave. After that, Spain and France both agreed to part ways with Italy.

Carafa started out as a bishop with Chieti. However, in 1524, he resigned in order to to co-found the the Congregation of Thetines with St. Cajetan. He was shortly recalled and made Archbishop of Naples and help set up the Inquisition. It opposed the Protestant movement and everything affiliated with it.

Carafa was elected Pope in 1555 under the political influence of Cardinal Farnesse as a mutual opposing force to Emporer Charles V. During his papacy, Pope Paul IV demonstrated a strong ethnocentrism against Spain at King Philip II. He was also racist against the Jews, forced the ones living in Rome to wear yellow hats and live in a ghetto. This continued for the next three centuries.

His papacy was further damaged when he dismissed his Cardinal Nephews over a bunch of scandals. He did curb many clerical abuses but his own methods were harsh, abusive and cruel.

He had approximately 100 Marranos of Ancona thrown into prison. About 50 underwent unjust trials and 25 were burned at the stake.

Almost needless to say, Pope Paul IV is considered to be one of the most notorious Popes in history.