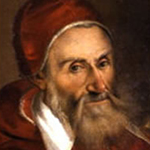 Pope Pius IV was the 224th Pope to take the throne and was deemed a moderate when compared to those who immediately preceded him as the Holy See. Pius was a canon lawyer who spent much of his time fighting the rising tide of Protestantism in the Germanic regions and fought to continue the Council of Trent. One of the great fights of the Papacy of Pope Pius IV was bringing an end to nepotism in the Catholic Church, however, he appointed his nephew as Cardinal Deacon in Rome to stabilize his power base.

Giovanni Angelo Medici was born on 31 March 1499 in the Italian city of Milan to a humble family who had aspirations of reaching power. His father was a tax collector with the Florentine Medici family giving them no attention until the election of Giovanni to the position of Bishop of Rome. By 1525, the future Pope had earned his degree as a lawyer from the University of Bologna and decided to seek employment in Rome with the Catholic Church in 1527.

A Long Career Before the Papacy

After arriving in Rome, Giovanni Angelo Medici held a number of positions of power because of his moderate nature and his skills as a legal expert. The future Pope held important positions in the Administration of various Pope’s, including Julius III and his predecessor, Paul IV.

It is fair to say, Pope Pius IV was not an overwhelming favorite for the Papacy following the death of Paul IV. Instead, the two factions seeking power in Europe led to a stalemate that lasted three months before Giovanni Angelo Medici became the compromise candidate and won election on December 25, 1559.

A Moderate in Difficult Times

One of the main reasons given for the election of Pius IV was his moderate nature and willingness to use diplomacy. Pius IV had served his predecessor, Paul IV as the battle of Lutheranism had waged across Central Europe leading to the hard-line nature of Paul being employed to try and heal the split within the Church. Pius IV took a different approach and is seen by many as a reformer in his policies towards everyday life.

The Council of Trent

The Protestant Reformation had caused problems for many in positions of power within the Catholic Church with Pius IV determined to bring the 19th Ecumenical COuncil to an end during his Papacy. The Council of Trent was called as a response to the rise of Calvinism and would look at how the Catholic Church would respond to its first great split.

One of the great issues seen with the Papacy of Pius IV is his approach to culture and progress. The culture and arts of Rome are often described as stalling during his Papacy of just over four years with Michelangelo called to Rome to cover the nudes in many chapels with more modesty. At the same time, Pius IV would be a forward-thinking leader looking to improve the everyday lives of people in Rome and the Papal States by introducing improved water and drainage programs.

Reducing the Powers of the Inquisition

As a moderate, Pope Pius IV found himself heading the Catholic Church following the aggressive rule of Paul IV. In response, Pius IV limited the powers of the Inquisition and went so far as to pardon the Queen of Navarre who was accused of Calvinism after an appeal on her behalf by the King of France.