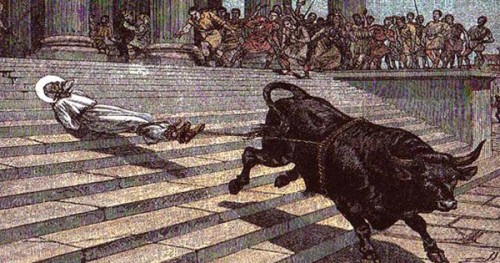 Saturninus. In the section of his work commencing I. 22 Irenaeus gives a list of heretics, apparently derived from Justin Martyr. The first two are the Samaritan heretics, Simon and Menander; the next, as having derived their doctrines from these, Saturninus and Basilides, who taught, the former in the Syrian Antioch, the latter in Egypt. Irenaeus says that Saturninus, like Menander, ascribed the ultimate origin of things to a Father unknown to all; and taught that this Father made angels, archangels, powers, authorities, but that the world and the things therein were made by a certain company of seven angels, in whom no doubt we are to recognize the rulers of the seven planetary spheres. He taught that man was the work of the same angels. They had seen a brilliant image descend from the Supreme Power, and had striven to detain it, but in vain; for it immediately shot back again. So they encouraged each other : “Let us make man after the image and after the likeness “. They made the man, but were too feeble to give him power to stand erect, and he lay on the ground wriggling like a worm until the Upper Power, taking compassion on him because he had been made “in Its likeness,” sent a spark of life which raised him and made him live. Saturninus taught that after man’s death this spark runs back to its kindred, while the rest of man is resolved into the elements whence he was made.

The same creation myth is reported by Irenaeus to have been included in the system commonly known as Ophite. But according to the Ophite story it is not the Supreme Power, but Ialdabaoth, the chief of the creative company, who bestows the breath of life; and these angels say, as in Genesis, “Let us make man after our image.”

We may count Saturninus as the originator of the myth, for the Ophite version has marks of less simplicity and originality. Saturninus further taught that the God of the Jews was one of the seven creator angels. He and his company were in constant warfare with Satan and a company of evil angels. So, likewise, there were two distinct species of men, the bad ever aided by the demons in their conflicts with the good. Then the Supreme Father sent a Saviour to destroy the power of the God of the Jews and the other Archons; and to save those who had the spark of life in themâ€”that is to say, the good. This Saviour had no human birth or human body, and was only a man in appearance.

Saturninus ascribed the Jewish prophecies, some to the creator angels and some to Satan. This is one of several points of coincidence between the reports given by Irenaeus of the teaching of Saturninus and of the Ophites. These do not ascribe any of the prophecies to Satan, but Irenaeus gives the scheme according to which they distributed them among the several angels. Saturninus does not appear to have left any writings. His sect is named by Justin Martyr and by Hegesippus. No later heresiologist appears to know anything about him beyond what he learned from Irenaeus; and Irenaeus probably derived all his knowledge from Justin Martyr.