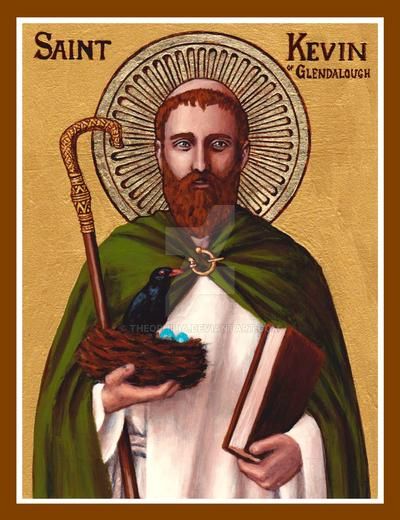 Saint Kevin of Glendalough was born in the year 498 in West Wicklow, Ireland and died in the year 618. He is also known as Coemgen, which means fair begotten in Irish. He was confirmed as a saint in 1903 by Pope Pius X.

At a young age he was sent to study under the Monk’s in Leinster, Ireland. Saint Kevin would then study for the priesthood at Cill na Manach.

He would move into a cave in Glendalough following his ordination as a priest after being led to it by an angel. The cave in which he lived as a hermit was a Bronze age tomb and has become known at Saint Kevin’s Bed.

While living in the cave he would go barefoot, eat sparingly, have clothes of animal skin and would pray all day. For seven years he would live this solitary life while sleeping on a stone bed in the cave.

Saint Kevin like many other Irish saints was well known living in harmony with nature. He was well known for having wild animals as companions and at other times for protecting them. One time a boar was being chased by hunter’s and their dogs stopped at where St. Kevin was praying. The dogs seeing the saint stopped while an immense flock of birds would stop the hunters.

He is the patron saint of:
Glendalough, Ireland
Arch Diocese of Dublin, Ireland
Blackbirds
Ireland