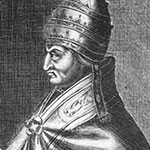 Pope Gregory XI was the 11th man to use the Gregory name as the leader of the Catholic Church. He was the 201st pope and ruled for more than seven years as one of the Popes at Avignon, which refers to those who ruled in France rather than Italy. You can learn about the life of Pope Gregory XI in this article.

From 1309 to 1376, all popes of the Catholic Church lived in France. Historians refer to them as the Popes at Avignon or Avignon popes. The man who would lead as Pope Gregory XI was born around 1329 in Maumont, which belonged to the Diocese of Limoges and given the name Pierre Roger de Beaufort. When he was still a young man, he saw his uncle go from an archbishop to the pope under the name Pope Clement VI. He was only 18 when his uncle named him a cardinal deacon. Pierre would attend university to further his education and then work for Sacred College.

When Pope Urban V passed away in the middle of December in 1370, nearly 20 cardinals met in Avignon to discuss the next pope. It didn’t take much time for them to unanimously pick Pierre. The College of Cardinals sent their dean to ordain Pierre and make him a priest at the beginning of January. He was crowned as Pope Gregory XI the following day at Notre Dame.

As the new pope, Gregory XI attempted two reconciliations. The first was between England and France, which was a failure. He then helped the people of Naples and Sicily come to an agreement and reconcile their issues. This helped both areas remain under the control of the papacy but allow them to work together. Though Gregory hoped to unify the Latin and Greek Churches, he could not do so before his death.

As a Pope at Avignon, Gregory XI was one of several men who ruled the Church without living in Italy. He hoped to bring attention to the affairs in Italy and find a solution to some of the problems that the nation faced. The pope made the mistake of appointing men in France to positions of power, which caused Italians to turn to the Duke of Milan for help as they thought this would weaken the country. The pope listened to their concerns and made several decisions that lost him favor with Florentine, including the excommunications of some men and a law that limited what people in that city could own.

Pope Gregory XI became only the second pope in history to leave France for Italy. He began his way to Rome in September of 1376 and made several stops as he sent word on what he wanted when he arrived. A massacre and riots were just two of the things he faced when he arrived in Rome. He was disgusted by what he saw in the city and hoped to return to France, but his death prevented that from happening. The pope died of natural causes not long after reaching Rome. The Church then had him buried in Santa Maria Nuova on the church grounds.