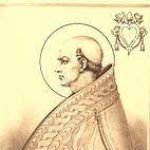 Pope Adeodatus I was the 68th pope and served for more than two years. He introduced the idea of using a papal seal, which later popes called papal bulls. This article will introduce the pope and discuss his life.

As with other popes from ancient times, history does not make much note of the life and times of Pope Adeodatus I. He was born sometime in 570 and grew up in Rome when it was still part of the Byzantine Empire. Known as Deusdedit or Diosdado, he felt a connection to the Church during his early years in part because his father, Stephen, was a subdeacon. After hearing the calling, he joined the Church and served as a priest for 40 years. He became a cardinal on October 15, 590.

Following the death of Boniface IV, the Church picked Adeodatus as the new pope. While Boniface IV established a tradition that allowed the pope to assign monks to open positions, Adeodatus instead had clergy fill those roles. He would also ordain 14 new priests and have them take on new roles within the Church. Most know him as the man behind the concept of papal bulls. These official documents bared the pope’s seal to show that he approved. Later popes would use the same practice.

In addition to papal bulls, Pope Adeodatus I left behind a lasting legacy due to the work he did with and for the poor. After Rome suffered an earthquake in 618, hundreds of citizens developed leprosy. Adeodatus was one of the first to rally citizens to help those in need and would spend time with the lepers. He passed away that same year of natural causes. Pope Adeodatus I was such a popular pope that it took more than one year for the Church to name Boniface IV as his successor. Pope Boniface IV would use many of the ideas and concepts that the former pope used and continue the use of papal bulls.

Quick Facts About Pope Adeodatus I

*Pope Adeodatus I was born in Rome when it was part of the Byzantine Empire circa 570.
*History recorded his birth name as Deusdedit and noted that he was the son of Stephen.
*He died on November 8 of 618.
*The pope passed away from natural causes.
*His papacy began on October 19, 615.
*The papacy of Adeodatus I ended upon his death in 618.
*Boniface V would become the new pope after the death of Pope Adeodatus I.

Interesting Facts About Pope Adeodatus I

*The Orthodox Church, also known as the Orthodox Catholic Church and Eastern Orthodox Church, named him a saint. He is one of the Orthodox Popes of Rome. The Church celebrates his legacy with an annual feast held on October 8.
*Adeodatus is one of several early popes buried in Saint Peter’s Basilica in Rome. Church members and others can visit the basilica to pay their respects.
*As Adeodatus often used the name Deusdedit while serving as pope, Adeodatus II is sometimes credited as Adeodatus I or simply Adeodatus. No other pope selected that name.
*Historical records kept by the Benedictine Order claim that he served as a monk within that order prior to becoming pope. Historians are unsure if this is true.
*Though records do not show his exact date of birth, the Church believes that he was 55 when he became pope and 58 when he passed away.
*His birth name roughly translates to “God has given,” which the pope believed meant that he was destined to work for the Church and serve an important role.