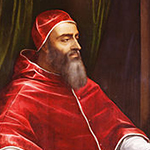 Pope Clement VII was the 219th pope and a member of the famous Italian Medici family. He is known for his connection to Michelangelo and for the political struggles that he faced. The life of Pope Clement VII and his papacy are addressed in this article.

Clement VII started life as Giulio, a member of the Medici family in Italy. Just before his birth, his father visited the Florence Cathedral and was murdered. No records indicate his mother, but he spent much of his early life under the care of an architect who was also his godfather. Lorenzo the Magnificent took him in and treated him as his natural son. As he was an illegitimate child, the Church banned him from certain positions. Lorenzo helped him enlist in the military and then attend college. When he passed away, Giulio took over the man’s role as a cardinal.

Known as Cardinal Medici during his later years, he supported the election of Adrian VI. After the pope passed away and Medici spoke out against the King of France, the cardinals decided that he would make a good pope. They elected him in 1523 in part because they thought he could end the war with France.

Clement VII continued the feud between Rome and France when he refused to let King Henry VIII divorce his wife. One of his nieces would later marry a man who became Henry II. He also made Charles V the Holy Roman Emperor. Known for his love of artwork, he commissioned several works that led to art historians nicknaming the art created during this era as Clementine. Though canon law stated that popes must remain clean-shaven, Clement VII grew a long beard after the Sack of Rome to show his distress at the men who died during that battle. The effects of the political and other feuds during his reign took their toll on the pope. Though he wrote several letters in the hopes of finding a resolution with France, he never had the chance to see if they would work before he passed away.