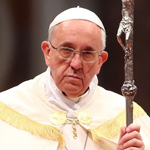 Pope Francis I is the 266th man elected as pope. He was appointed in 2013 at the age of 76 and met with many world leaders since taking on the position.

This article offers a look at his life before and after becoming pope.

Born in December of 1936 as Jorge Mario Bergoglio, Pope Francis was one of five children born to Regina and Mario. As the eldest, he often helped his mother care for the younger children.

After finishing elementary school, he attended a technical school and received a diploma in chemical tech. While working in a lab, Jorge also worked part-time as a bar bouncer and as a custodian. He became a fan of football and dancing, often visiting tango clubs during his youth.

Calling to the Church

In the late 1950s, Jorge received a calling to help the church. He went back to school and began working with the Society of Jesus. Jorge would also work as a professor at a local college and teach psychology and literature.

Named one of the archbishops of Buenos Aires in 1997, he brought awareness to some of the slums in the city and appointed more priests to work in those areas.

Before becoming pope, Pope Francis went through an extensive physical exam that found he was healthier than other men of the same age. He became the 11th pope born outside of Europe and the first since Gregory III who served during the eighth century.

Pope Francis is also the first pope born in the Southern Hemisphere. Known for his simple approach to the role, he has a deep commitment to the poor and believes that the Church should help those in need. He even chose his name in honor of a man who helped the poor. Elected on March 13, 2013, he accepted the position and became inaugurated on March 17.

Pope Francis I experienced some tension with Argentina after he called for a better distribution of wealth in the nation. The pope also believes in the teachings of mercy as established by Jesus Christ and encourages those who think they failed the Church to come back.

Quick Facts About Pope Francis I

Interesting Facts About Pope Francis I