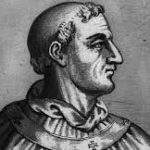 Pope Gregory VI was the sixth man to use the Gregory name and the 148th pope of the Church. He also shared his name with an antipope who served several months in 1012. Know as the Pope Who Bought the Papacy, he ruled for just over one year. You can find out more about the life of Pope Gregory VI in the following article.

Before becoming Pope Gregory VI, he was a man known as Giovanni Graziano, which translates to John Gratian. He was born circa 1000 in Rome, Italy and likely belonged to a wealthy family. His first role within the Catholic Church was as the Archpriest of St. John by the Lion Gate. John worked for the Church in this position for several years and saw the issues that arose during the papacy of Pope Benedict IX.

Pope Benedict IX was an unusual choice for the bishops to make as he was only in his early 20s when his family forced him into Church work. There are some reports that he was around this age when he took on the papacy. John was the newest pope’s godfather and listened as he complained about the papacy and talked about how he wanted a different life. Benedict then told his godfather that he wanted to leave the Church and marry his lover.

The Pope Who Bought the Papacy

John and Benedict would reach an agreement wherein John would give his godson a financial sum each month that he called a pension. In exchange, Benedict would hand over the papal throne. The bishops agreed to this change and allowed John to ascend the papacy and become Pope Gregory VI, which would earn him the nickname of the Pope Who Bought the Papacy.

Though most supported Pope Gregory VI, Pope Sylvester III did not. He believed that the Bishop of Sabina should be the next pope and installed him in the position. Benedict was forced to return to Rome and demand that the bishop retire and hand over the papacy to Gregory. Facing opposition from those who believed he was not a good ruler, Gregory would eventually abdicate the throne and allow Clement II to become pope.

King Henry III heard of the problems in Rome and arrived to settle the dispute. He held the Council of Sutri, which deposed both Gregory VI and Benedict IX and led to the election of Pope Clement III. Gregory agreed to step down to prevent others from accusing him of simony and left with the king. They would travel back to Germany where the former pope would remain for the rest of his life. He died more than a year after leaving the papacy of natural causes. There are no records relating to his burial place, though he likely died and was buried in Cologne.