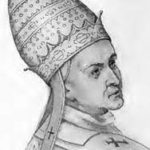 Pope Benedict IX was the ninth pope to use the name Benedict and the 145th pope in history. Known as a controversial ruler, he served as pope three different times. This article looks at all three of his tenures and his life before taking on the role.

The Count of Tusculum was the father of Benedict IX and named him Theophylactus. His official title was Theophylactus of Tusculum. He was extremely young when he became pope for the first time and unprepared for the job. Though official records show that he was 20, some records indicate that he was as young as 11. Benedict IX received the position after his father paid off a group of Romans. Just four years after becoming pope, Roman bishops expelled him from Italy. Emperor Conrad II sent forces to secure his return and put him back in control.

Benedict IX was pope from 1032 to 1044 and then for two months in 1045 before becoming a pope for the third time from 1047 to 1048. Opposition to his lifestyle choices led to religious leaders expelling him from the city in 1044, which also lead to those leaders naming Sylvester III as the new pope. Though he came back once again, he would eventually abdicate the throne because he wanted to marry. Facing charges that he accepted bribes in exchange for Church appointments, he was excommunicated from the Church.

Reports show that Benedict IX was repentant for the choices he made in life. Some claim that he engaged in homosexual affairs and that he had relationships with women. Records from the time indicate that he was a sinner who accepted bribes too. When he finally left Rome, he returned to his Church and lived a quiet life. His final days were so quiet that no one is sure of his exact date of death.

*He was born in Rome, Italy sometime around 1012.
*The name given to him at birth was Theophylactus of Tusculum. This is the same name he used between his tenures as pope.
*He died at the age of 43 in either December of 1055 or January of 1056.
*Benedict IX repented before his death and lived a quiet life outside of Rome. No records indicate a cause of death.
*His papacies began in October of 1032, April of 1045 and November of 1047.
*Those papacies ended in September of 1044, May of 1045 and July of 1048.
*His successors were Sylvester III, Gregory VI and Damasus II.

*Benedict was closely related to several popes. Both Pope John XIX and Pope Benedict VIII were his uncles. His great uncle was Pope John XII.
*There are rumors that Pope Leo IX overturned the excommunication of Benedict IX not long before the former pope died. This likely happened because Benedict IX never faced the official charges that led to his excommunication.
*When he decided to abdicate, Benedict IX turned to John Gratian for help. The man was a priest and also his godfather. Benedict IX accepted money from the man and agreed to abdicate if the Church named Gratian the next pope. Not long after leaving, he came back to Rome and lobbied to become pope again.
*Benedict IX is the only man in the history of the Church to serve three terms as pope. He also one of the only popes in history expelled from Rome.
*In his later years, he attended services at the Abbey of Grottaferrata. Following his death, the abbey spoke in favor of him and agreed to have him buried there.