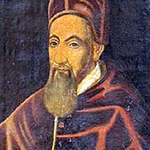 The 230th ruler of the Catholic Church, Pope Innocent IX held onto the position for only a short time. However, his reign occurred during a tumultuous time in Europe. Waring factions created violence and famine, resulting in the deaths of millions!

Pope Innocent IX’s support of one side was monumental. Some historians say that it played a part in the treaty that ultimately ended the bloodshed.

An educated man, Pope Innocent IX’s pontification was an obvious move. He held many positions in the Church throughout his life. While he is often seen as a short-term replacement for the previous Pope, his reign was important nonetheless.

Before his rise to the papacy, Pope Innocent IX was known as Giovanni Antonio Facchinetti. Born in Bologna, Facchinetti would go on to study at the University of Bologna for several years. There, he focused on jurisprudence and became one of the most promising law professionals to come out of his class.

He went on to obtain his doctorate in civil law and canon law. His experience in the latter field led to his ordainment as a priest in 1544 and his canon appointment in 1547.

Giovanni Antonio Facchinetti would later move to Rome, where Cardinal Nicolò Ardinghelli chose him to serve as a secretary. That position didn’t last very long, as he went on to serve Cardinal Alessandro Farnese, who was the grandson to Pope Paul III and the brother to the Duke of Parma. This connection to Cardinal Farnese would prove to be beneficial.

Cardinal Farnese later appointed Faccihenetti as his ecclesiastical representative. The Cardinal was also the Archbishop of Avignon, so he called on Faccihenetti to handle his affairs in Parma.

Several years later, Faccihenetti became the Bishop of Nicastro, which was in Calabria. In this position, he was able to attend the historic Council of Trent. Later, he was called by Pope Pius V to serve as an ecclesiastical diplomat in Venice. After being recalled from Venice in 1572, he served as the Patriarch of Jerusalem. He would continue to hold this position until he was made Cardinal in 1583.

This appointment came from his predecessor, Pope Gregory XIV.

Interestingly enough, Pope Innocent IX had experience ruling the Church and the Papal States long before his pontification. He handled almost all administrative duties for Pope Gregory XIV, as the pope was suffering from poor health. After Pope Gregory XIV’s death, his election was a natural choice.

However, it did not come easy. The French War of Religion was already dividing the Church. Spanish and Anti-Spanish factions formed, resulting in a heated debate about the next papal election.

During his brief time as Pope, Innocent IX showed support for the cause of King Phillip of Spain and the Catholic League. He opposed King Henry IV of France.

Another notable achievement was his rules of Church property. He prohibited the alienation of church property. His stance on the subject impacted both civil and canon law.

Pope Innocent IX’s reign lasted about two months. Despite his ailing health, he made a pilgrimage to Rome’s seven pilgrimage churches. His journey took place in December. As a result, he ended up getting sick and perishing before he could complete his travels.