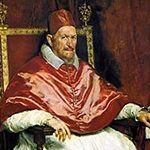 Pope Innocent X was the 236th ruler of the Catholic Church and held the papal throne for more than a decade. Born in Rome, he had a familial connection to Pope Alexander VI and helped create a large fountain in the city. Many know the pope for a portrait painted in his honor that is on display in the National Gallery of Art.

Giovanni Battista Pamphilj was born in Rome on May 5, 1574, and spent most of his life in the city. His family came from Gubbio, which is now part of Umbria. They gained a strong following and reputation as many of the members served the Church in different roles. Some also spells his last name Pamphilli. Giovanni knew from an early age that he would help the Church and studied at Roman College before joining its ranks. Only after graduating did he hold his first position as a lawyer. Giovanni then took over his uncle’s role as an auditor and later served as a canonist. Others took notice of his work, which led to Pope Gregory XV naming him a diplomat and sending him to the Kingdom of Naples. Giovanni also became close to King Philip IV of Spain.

Many historians credit his papal nomination with his connection to King Philip IV. After more than two decades on the papal throne, Pope Urban VIII passed away. Giovanni was a cardinal by that point but only attended the papal conclave and did not intend to put his name forth. A group of the former pope’s nephews disagreed with the leading choice of a Spanish pope and believed that a French choice was better. When they could not gather enough support for their choice, they agreed to select Giovanni.

Giovanni began his papacy on September 15, 1644, and took the name of Innocent X, which made him the 10th man to use that name as the pope. He quickly issued a papal bull against the French supporters who attempted to take the throne. The bull allowed him to take the property that they owned and eliminate the benefits they earned from working for the Church. He would later restore relations with France after one of the men married the pope’s niece.

Many know Pope Innocent X for the bull he issued that spoke out against Jansenism. It was a sect of the Church led by Cornelius Jansen that focused heavily on predestination and original sin. The pope also had a close relationship with the woman once married to his brother, which led some historians to believe that the two had an intimate relationship. Pope Innocent X oversaw a jubilee celebration in his later years and sat for one of the portraits named after him. He was 80 when he passed away from natural causes after sitting on the papal throne for more than a decade.