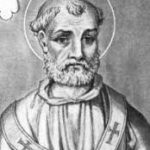 Pope Saint Anacletus was the third leader of the Church and followed both Peter and Linus. Often called Cletus, he ruled from circa 79 to 92 AD. The pope was known for dividing Rome into 25 regions and giving control over each one to different bishops. You can read about the life of Pope Anacletus in this article.

Anacletus was the first pope born and raised in Greece. Born circa 25 AD, he lived in Athenae, the city now known as Athens. His parents named him Anakletos, he would also use the name Kletos. Anacletus knew Peter and worked closely with him. It was Peter who ordained Anacletus and made him a priest, which led to him later becoming pope. He would use both the name Anacletus and the name Cletus.

There is some dispute over his papal reign and how long it lasted because his papacy wasn’t recorded until later years. Most state that he was pope from 80 to 92 AD, but other records list his papacy as running from 77 to 88 AD. We know that he took the position after Pope Saint Linus died and that he likely ruled for 12 years.

Rome looked quite different in the early days than it does today. Anacletus inherited a papacy with no formal rules or edicts. He created parishes in Rome and assigned bishops and others to control those 25 districts. This would help each group establish churches and decide on the hierarchy used in each one. During his time as pope, Anacletus also ordained several priests. Though we have records of some of those priests, they do not list how many he ordained.

To make sure that bishops had the experience that they needed, Anacletus decreed that at least three current bishops must be on hand when a bishop took his orders. He also asked that they took their final orders in public as a way to help followers participate.

Near the end of his papacy, Anacletus would also make changes to churches and burial sites. He called for the construction of a new church built to honor Saint Peter and requested that the church reserve several spots in the nearby cemetery for martyrs. Anacletus believed that martyrs were witnesses to the atrocities that Christians faced and that they deserved a good final resting place. He also asked that some of the spots be set aside for future martyrs.

When Pope Anacletus died, his body was moved to Vatican Hill and placed near Pope Saint Peter. Vatican Hill is now part of Vatican City and home to the current pope. The Canon of Mass, also known as the Royal Canon, mentions his name. Though the Church once had separate feast days for Saint Cletus and Saint Anacletus, it now recognizes the two men as one person known as Pope Saint Anacletus with a single feast day.