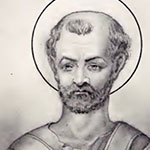 Pope Anicetus was the 11th pope of the Church and also known as Pope Saint Anicetus. Though he led from around 157 to 168 AD, some records indicate that his papacy began as early as 153 AD. You can find out more about Pope Saint Anicetus in this article.

As his papacy occurred early in the years of the Church, there aren’t many records about his early life. Anicetus was born in Emesa, Syria to Syrian parents. His birth date is unknown but likely occurred sometime in 92 AD. The city where he was born and raised is now called Homs.

Anicetus was picked to handle the Church after Pope Saint Pius was martyred. His papacy began circa 157 AD. Some early Church records claim that his papacy began in 153 AD, which would mean that Pius died earlier than previously thought. His papacy was marked by opposition to the Church.

Polycarp of Smyrna visited Rome to speak with Pope Anicetus about the Easter celebration. He was a former disciple of John the Evangelist and the leader of the Church of Smyrna. The man believed that they should celebrate the crucifixion of the Savior two weeks or 14 days after Nisan started. He also believed that they should keep this date the same every year, no matter what day it fell on.

The pope did not agree with the man’s beliefs but did agree that his Church could celebrate the crucifixion on the date that they wanted. This would cause problems in the future as the Church set Easter on a specific date. The Church of Smyrna would continue celebrating Easter at the same time as Passover, while the Catholic Church celebrated Easter on Sunday.

No Priests with Long Hair

The Church recognizes Pope Anicetus as a martyr, which is one of the reasons why he is now a saint. Tradition holds that he was martyred on the orders of Roman Emperor Lucius Verus who co-ruled the empire with Marcus Arulleius who was his adopted brother. Unlike other martyred popes, there are no records to indicate how he died or where it occurred. Some believe that he was martyred because he encouraged others to practice Christianity rather than worship the Gods and idols that other Romans did. He was likely in his early to mid-70s at the time of his death. To honor him, the Church had his body moved and buried in the cemetery and tombs of Callixtus. In later years, the Church began calling Anicetus Pope Saint Anicetus after he became canonized.