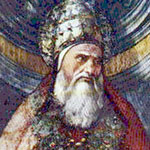 Pope Pius I was the 10th pope of the Church and led from around 140 to 155 AD. He was known for his views on Easter and for his family, which included a wealthy freedman, Hermas who was his brother. This article will cover the early life of Pius and his later years that led to him becoming Pope Saint Pius.

Pius was Italian by birth as his father was also Italian. Born sometime in the latter part of the first century, he was born and raised in the small town of Aquileia. An early book written about popes claimed that his father was a man named Rufinus and that he had a brother named Hermas. Another book about popes claimed that both men were former slaves and later freedmen.

Following the martyrdom of Pope Saint Hyginus, the Church looked for someone new to lead them. The bishops chose Pius and asked him to assume the role circa 140 AD. During his papacy, he did two important things. The first was an official decree that stated people should only celebrate Easter on Sundays as this was the Holy Day. He decided that Christians should celebrate Easter on the first Sunday that came after the first full moon in March. Pope Pius would also have a hand in the construction of Santa Pudenziana, which is one of the oldest churches in Italy. In keeping with the tradition at the time, he used his birth name as his papal name. Eleven other popes and one antipope would use the same name. The last pope named Pius was Pope Pius XII who ruled from 1939 to 1958.

Pope Pius was in Rome when Saint Justin arrived to teach. Also known as Justin Martyr, he taught theology and left behind several writings, including The First Apology and Dialogue with Trypho. Justin would also write about some of the apostles and others who were martyrs. Known for his attempts to teach the heretics in Rome, he would become a martyr when he refused to stop teaching. Some historians doubt that Pope Pius was a martyr or that he ruled during the listed dates as Saint Justin was there at the same time and did not mention him.

To help the Church, Pope Pius spoke out against its opponents and publicly denied that the Gnostics and Valentinians were correct in their beliefs. An early book called Roman Breviary contained the Latin rites of the Church and standards the popes needed to follow. This was one of the first books to mention that Pope Pius was martyred. When revising the General Roman Calendar in the 21st century, workers could find no proof of his martyrdom. The Roman Missal includes his name and set his feast date as a memorial in which followers could remember his papacy. This new ruling also states that those who live in locations where other celebrations occur on that date do not need to recognize him on his feast date.

Quick Facts About Pope Pius I

Interesting Facts About Pope Pius I