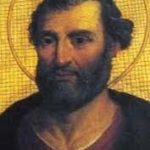 Pope Eugene I was the 75th pope and was canonized — made a Catholic saint — after his death. Like many other early popes, he kept his birth name after ascending to the Throne of St. Peter. This article provides interesting details about the life and papacy of Pope St. Eugene I.

A Roman from the Aventine region along the Tiber, Eugene I was the son of Rufinianus. He became a cleric in the Catholic church at an early age and spent his life in dedication to the church. Clerics are local ministers and deacons.

Pope Eugene I’s election to papacy came under unusual circumstances. His predecessor, Pope Martin I, was still alive and living in exile as a prisoner of Emperor Constans II. In fact, June 18, 653, Constans troops forcibly carried Martin out of the city for refusing to submit to their demand for him to accept Monothelitism. This is a belief that Jesus had only one will and which is considered blasphemous by the Catholic church.

At the time of his appointment, many Romans believed that Pope Eugene I was being placed on the Throne of St. Peter as a pawn to do the Emperors’ will against the wishes of Pope Martin I. However, a letter sent by Martin shortly before his death indicated his approval of Eugene as his successor and Pope Eugene I’s actions once in power demonstrated that he was no puppet of the Byzantine Emperor.

The challenges facing Pope Eugene I began as soon as he took power. Emperor Constans II immediately demanded that Eugene capitulate to the demands that Martin refused to give in to. These included acknowledging Peter as the Patriarch of Constantinople and allowing the tolerance of Monthelites. Despite threats to exile him like Martin and to roast him alive along with his Roman supporters, Pope Martin I stood firm against the demands and refused.

Emperor Constans II did not get the chance to make good on his threats against Pope Eugene I. The capture of the city of Rhodes in 654 and Constans’ defeat at the naval battle of Phoenix in 655 stopped his aggression cold. Pope Eugene I went on to lead the Catholic church for another two years until his death from natural causes.

Quick Facts About Pope Eugene I

Pope Eugene I was born in Rome during the Byzantine Empire era in 615 AD.
There is no record of any other name for Pope Eugene I, so it is safe to infer that his name was Eugene as most early popes kept their given name.
He died in Rome June 2, 657, at the age of 42.
Although Emperor Constans II threatened to “roast” him alive, Pope Eugene I died peacefully of natural causes.
He was elected pope Aug. 10, 654, which would make him just 39 years old and one of the youngest popes.
His papacy ended with his death.
Pope Eugene I was succeeded by Pope Vitalian.
Fascinating Details About Pope Eugene I

Many at the time believed he was appointed as a puppet of Emperor Constans II, but he quickly proved them wrong by refusing the Emperor’s demands.
The Cathedral of Saint Eugene, where Pope St. Eugene I is the patron saint, is in the Diocese of Santa Rosa in California.
Pope Eugene I consecrated 21 bishops to serve throughout the world during his time as the pope.
Pope St. Eugene I was buried at the famous St. Peter’s Basilica in Rome.
If the date on which Eugene was canonized was ever recorded, it has been lost to time, but his feast day is June 2.