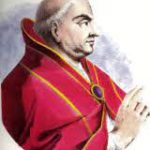 Pope St. Martin I held the role of pontiff and bishop of Rome from his ascension on July 21, 649 A.D. up to his death on September 16, 655 A.D. St. Martin held the important post as the ambassador to Constantinople and the Eastern Empire under Pope Theodore I. The Western church selected Martin to succeed Theodore I as pontiff upon the latter’s death. Pope Martin I became the lone pontiff during the era of the Byzantine (Eastern Roman Empire) Papacy to serve without the imperial mandate from Constantinople.

Brief History and Background on Pope St. Martin I

Martin I came into the world in a place that is now named for him Pian di San Martino (near Todi, Umbria). Born to noble parents, Martin boasted impressive intelligence and a love of helping the poor. One historical source claims that Martin was a member of the Order of St. Basil.

During the early portion of the reign of Pope Theodore I (from 642 A.D. through 649 A.D.), Martin served as the official legate for the pontiff to Constantinople. When the church selected him to become pope in 649 A.D., Martin was serving the Western church as deacon.

Pope Martin started his papacy off on dangerous ground by not waiting for the Eastern imperial approval of his election before becoming consecrated as the bishop of Rome. Among his first acts in office Martin I convened a church meeting in the Lateran Council (of 649) to address the issue (raging especially in the Eastern Church) of Monothelitism. Martin I’s council sat in the St. John Lateran Basilica and numbered 105 bishops among its attendees (who primarily hailed from Italy, Sardinia, Sicily, and a few from Africa).

The Lateran Council sat for five sessions between October 5th and 31st of 649 A.D. In no less than 20 church canons this council condemned the authors of Monothelitism and their heretical beliefs along with their writings that had encouraged its spread. This official condemnation included the exposition of faith by Constantinople’s Patriarch Sergius I (called the Ecthesis) that Eastern Emperor Heraclius had sponsored and the then-ruling Emperor Constans II also backed.

Pope Martin lost no time in energetically publishing his Lateran Council (of 649 A.D.) decrees via an encyclical. This infuriated the Eastern Emperor Constans II who responded with orders for his top official of Italy the exarch of Ravenna to arrest the pope if Martin continued this way and then to dispatch him in chains to Constantinople. Adding to the trouble the pope found himself in, Emperor Constans also accused St. Martin of making unapproved contact and attempting to collaborate with the Rashidun Caliphate of Islam. Pope Martin protested his innocence but could not convince the enraged imperial representatives.

Logistically these orders for arrest were not possible for several years, yet the Eastern Imperial agents finally caught up with Pope Martin when they arrested him on June 17, 653 A.D. along with Maximus the Confessor in the Lateran Palace. The emperor’s forces rushed Pope Martin I from the Eternal City via Naxos the Greek island to Constantinople (arrived in the imperial capital September 17, 653 A.D.).

Constantinople Patriarch Paul II implored the emperor not to execute Pope Martin and obtained a reduced sentence on his behalf. While he was imprisoned, the Eastern emperor’s officials pushed the Romans to elect a successor to St. Martin in Eugene I. Pope Martin I appears to have agreed upon his successor though he did not want him chosen before his death.

– How he died
Pope Martin suffered from a debilitating imprisonment and great public abuse in Constantinople before the Eastern emperor banished him to Cherson. He reached his final place of banishment on May 15, 655 A.D. then died there September 16th.

Pope Martin I is similarly called Martin the Confessor.

St. Martin I served as the lone pope in the Byzantine era of the papacy who did not receive the imperial seal of approval on his election.

Because of his intense opposition to a heresy popular in the Eastern Church called Monothelitism, Pope Martin I suffered arrest and imprisonment in Constantinople.

Both the Catholic Church and the Eastern Orthodox Churches count Pope St. Martin I as a martyr for the faith and a saint today.