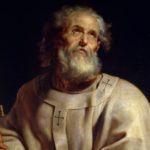 Pope Saint Peter was an apostle of Jesus Christ and regarded as the first pope in history. Other names used to describe him include Saint Peter, Simon and Simon Peter. You can learn about his sainthood and some interesting facts about the papacy of Pope Peter in this article.

Peter is one of the only popes mentioned in the Bible. He appeared in the New Testament under the names Simon and Simeon. The Act of the Apostles and the New Testament both discuss his life and times. Peter was originally a fisherman who saw Jesus heal the mother of his wife. He had a brother named Andrew who he often fished with before and after becoming an apostle. Peter began following Jesus and was with him at the Last Supper.

The Church believes that Peter was at Jesus’s crucifixion and that he denied Him three times. Records also indicate that he was the first person who saw Jesus during his resurrection. Though Peter was just one of the apostles, he became the first leader of the Christian Church and the original pope. As he worked closely with James the Just, some consider Peter the Bishop of Rome and James the Bishop of Jerusalem.

As the Bishop of Rome, Peter is also recognized as the founder of the Church. He worked with Paul and the other apostle to spread the word and teachings of Jesus Christ and encouraged them to follow Him. Peter opened the first church in Antioch and later moved through the Roman Empire to build new churches and find new followers.

The death of Pope Saint Peter is still discussed by historians today. Some interpret a section of the Bible to mean that Peter died in prison sometime around 44. Other historians believe that his death occurred much later and that he was crucified in the same way that Jesus was. The official stance of the Church is that he did by crucifixion just a few months after Rome was destroyed by a fire. Pope Clement was one of the first popes to mention Peter as a martyr. His body was moved to a tomb later called the Saint Peter’s Tomb. Emperor Constantine would later build a church called Saint Peter’s Basilica near the spot where the Church had the pope buried. Pope Vitalian gave a chain to the queen of the Anglo-Saxons that he believed contained the remains of the chains used to hold Peter to the cross. During the 1950s, workers found bones buried beneath the church that many historians now believe were his final remains.

*Saint Peter was in Bethsaida, which was part of Syria and the Roman Empire.
*He was born circa 1 AD.
*Peter died between 64 and 69.
*Historians are divided on how Peter died. While some think that he died while in prison for following Jesus, others think that he was crucified.
*The Church lists his papacy as beginning in 30 AD and then again in 64 AD.
*His first papacy ended 33 AD and the second around 68 AD.
*Pope Saint Linus served as the successor to Peter.

*In Matthew in the Bible, Peter is one of the apostles who sees Jesus walk on water. He attempts to follow in his path but only takes a few steps before sinking.
*As a saint, Peter shares a feast day with Paul the Apostle. Their feast day is June 29 in the Catholic Church, Oriental Orthodox Church, Lutheran Church, Anglican Church and Eastern Orthodox Church. He is also recognized with the Confession of Saint Peter on January 18 and the Chair of Saint Peter on February 22.
*Two of the writings attributed to Saint Peter are 1 Peter and 2 Peter. Both of these letters appear in the New Testament. Some believe that he also influenced the Gospel of Mark as John Mark who wrote it was Peter’s assistant.
*The first artist to create a portrait of Peter did so during the 4th century and gave him an iconic look that later artists would also use. Peter is often balding and has white hair with a small beard. Saint Peter Sinking on the Water is a famous piece that depicts him holding onto Jesus as Peter sinks into the water beneath Him.
*Saint Peter is the patron saint for many different groups, including butchers, bakers, cobblers and locksmiths. There are 11 institutions named in his honor such as St. Peter’s College and St. Peter’s School.