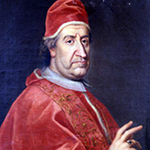 Clement XI was the 243rd man to serve as leader of the Catholic Church and the 11th of such individuals to choose Clement as his name. This article will try to distinguish him from the many other popes by showcasing his life, papal legacy and even give a few personal tidbits about the man at the end.

Giovanni Albani was born to nobility on both sides: his mother, Elena Mosca, was high nobility from Bergamo and his father Carlo Albani was descended from the Staccoli family of northern Albania. He received education at the Roman college, becoming quite skilled at Latin and earning doctorates in canon and civil law. He also frequented the academy of Queen Christina of Sweden.

He served as papal prelate under Pope Alexander VIII and was made Referendary of the Apostolic Signatura by Pope Innocent XII. In addition to his work for the Church, Albani also served as governor of Rieti, Sabina and Orvieto.

Alexander VIII made him Cardinal-Deacon Albani of Santa Maria in 1690, despite some protest. After some discussion, he was relocated to the Diaconia of San Adriano al Forno. Later, he became Cardinal-Priest of San Silvestro in Capite. After his ordination to the priesthood in September of 1700, he celebrated his first Mass on October 6th within Rome.