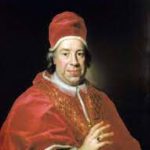 Pope Innocent XIII was the the 244th person to lead the Church as its pope and the 13th among that group of influential people to choose “Innocent” as his name. This article seeks to distinguish him from his many, many, many predecessors and successors by highlighting any major achievements as pope and in his time spent serving the highest position within the Catholic Church.

Michaelangelo dei Conti was born as the son of Duke Carlo II of Poli and Isabella d’monti. Similarly to Popes Innocent III, Gregory IX and Alexander IV, he was born into the landed gentry.

Conti began his studies in Ancona, then transitioned to learning from Rome’s Jesuits in the Collegio Romano. He would pursue the study of canon law and civil law at La Sapienza University, of which he earned doctorates in and moved to join the priesthood. His positions included the following titles and offices.

Conti also served as nuncio to Switzerland and Portugal.

Conti would become Cardinal-Priest of Santi Quirico e Giulitta by Pope clement XI‘s decision on June 7th, 1706. This came about as a means of replacing Gabriele Filippucci, who had declined becoming a cardinal. Conti would not receive his church until February 23rd of 1711. He would later move to Osimo to serve as archbishop in 1709, then again to Viterbo e Toscanella in 1712. After serving as Camerlengo of the Sacred College of Cardinals between 1716 and 1717, he resigned from his diocese in 1719 due to illness.

While his papacy was a relatively well-run one, it was also one with little of note or achievement; Innocent XII’s papacy lasted only 34 months.