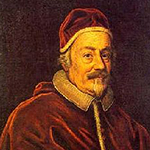 Alexander VIII was the 241st leader of the Catholic Church and the eighth such individual to take the papal name of Alexander. This article will try to distinguish him from his many predecessors and successors by highlighting the specifics and details of his life and papacy.

The man who would become Pope Alexander VIII started life as Pietro Ottoboni, the youngest of nine children resulting from the noble union of Vittoria Tornielli and Venice’s grand chancellor Marco Ottoboni. Pietro was a gifted scholar and soon gained accolades while studying canon and civil law at the University of Padua, which he gained doctorates in during the year 1627.

It was during the papacy of Pope Urban VIII that he served in the position of Referendary of the Apostolic Signatura. Ottoboni would later become the governor of Terni, Reiti, Citta di Castello and Spoleto. He would also fill the position of the Sacred Roman Rota’s auditor.

Ottoboni also served as the College of Cardinals’ Vice-Dean from his time as Porto e Santa Rufina’s Cardinal Bishop until his election as Innocent X’s successor.

Most of the Church’s coffers during Alexander VIII’s papacy were redistributed into his family’s pockets and he was fond of promoting his family members to positions of power within the Church.

While he was also quite taken by the plight of the Papal States’ poor, he passed policies that would lower taxes. While this seemed like quite the beneficent action, Alexander VIII was also fond of giving riches to his relatives. He also bolstered the Venetian military in its efforts of fighting the Turks through money and sending ships and men to its campaign in Albania.