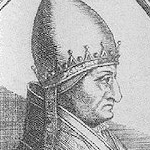 Pope Gregory X was the 184th pope of the Catholic Church and the 10th to use the Gregory name. Many know him for the regulations he implemented that the Church still uses and for his beatification in later years. You can learn quite a bit about Pope Gregory X in this article.

Before becoming Pope Gregory X, the man who would adopt this name lived in Piacenza, Italy. He was born circa 1210 and given the name Teobaldo by his parents. Teobaldo was a member of the Visconti family who lived in the city for many years. Family connections put him in touch with the Cistercian family and later Cardinal Giacomo who was a bishop. This connection helped him strike out and gain support from a monastery that named him an abbot. Teobaldo became close to the cardinal and traveled with him often. The cardinal also sent the man on solo trips to Germany and France, which helped him gain recognition from other bishops.

When Pope Clement IV passed away, bishops were at a loss as to who to choose for the papacy. They convened for a papal election in 1268 and began suggesting names. Several other men served before Clement IV but usually ruled for a short period. As they could not reach a decision, the election continued for nearly three years and led to the rise of an antipope. Teobaldo turned down the position several times as he wanted to continue working with the cardinal but finally accepted the position following the cardinal’s death.

Historians primarily recognize Pope Gregory X for overseeing the Second Council of Lyons. This was a convention designed to unite the eastern and western churches. During the council, both the pope and bishops met with Michael VIII who was the Byzantine Emperor. They discussed launching a new crusade and making changes to the Church. Those in attendance agreed that popes would remain on-site during future elections until they could reach a decision removed Alfonso X from the imperial throne.

The Second Council of Lyons began in 1271 when the pope came to Rome but continued for several years and kept him away from his native home. Pope Gregory X became ill during the last days of the council and saw his symptoms worsen in the coming days. He had a hernia that caused him some pain and asked his companions to stop several times on their travels to let him rest. The pope made it to Vienne and several other cities before he passed away from a high fever on January 10, 1276, while in Arezzo. His body was then interred in the Cathedral of Arezzo. Pope Clement XI oversaw the beatification of Pope Gregory X in 1713. He is now the patron saint of the church where his body lies and associates in the Franciscan Order.