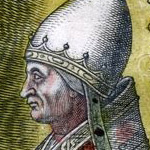 Pope Innocent IV was among the most important popes of the medieval period with his reign from 1243 A.D. to 1254 A.D. In his pontificate, he battled with Frederick II the Holy Roman Emperor until Innocent finally proved the victor. The pope’s devout conviction in the universal papacy caused him to try to re-unify the estranged halves of the eastern and western churches and to proselytize the East.

Pope Innocent IV was born with the given name of Sinibaldo Fieschi to Count Hugo Fliscus of Lavagna. Their family had standing in financial as well as church circles. Sinibaldo went to Parma to study under the tutelage of three uncles, all of whom were bishops. From Parma he went to the most illustrious canonists’ school (at Bologna) and grew into a canon law master. Sinibaldo served as the canon for the Genoa Cathedral before becoming the canon of the Parma Cathedral.

The church made Sinibaldo the bishop of Albenga in Italy in the year 1225 A.D. Pope Gregory IX elevated him to the offices of the vice chancellor for the church and the St. Lawrence cardinal priest in 1227 A.D. Sinibaldo rose to become the successor to Pope Celestine IV with election to the papacy on June 25, 1243 A.D.

Innocent IV found Emperor Frederick II eager to begin negotiations on the long-running conflict between the empire and the church. Pope Gregory IX had excommunicated Frederick, and Innocent IV did not have much trust for the emperor either. Even though the rivals struck an accord on the 31st of March in 1244 A.D. Pope Innocent IV chose to secretly flee for his life as he no longer felt secure in Rome. He traveled on Genoese galleys that his family had prepared for him from Civitavecchia to Genoa and finally to Lyon in France. There Pope Innocent remained under the French King Louis IX’s protection while he planned his strategy against Frederick.

Pope Innocent IV then proceeded to call a general church council to attend him in Lyon the next summer. He addressed three issues at this papacy-making conclave including the status of the Holy Roman Emperor, the protection of Christendom from the advancing Mongol hordes, and the liberation of Jerusalem from the Muslims who had conquered the Crusader Kingdom of Jerusalem.

Holy Roman Emperor Frederick II suffered official condemnation at the council. The church under Innocent then released all of the emperor’s subjects from their oaths of loyalty to Frederick, and the German princes overthrew him on the three charges of sacrilege, perjury, and suspicion of heretical beliefs. After Frederick died a broken man in December of 1250 A.D., Pope Innocent IV staged a triumphant reentry to Rome three years later.

This was not the end of the ongoing epic struggle against the Germanic kingdom for Innocent’s papacy as Frederick II had a son in Conrad IV who opposed the pope. Innocent also struggled to select a prince who he felt he could safely trust the Kingdom of Sicily to as a fief.

This struggle in Southern Italy proved to be Pope Innocent IV’s undoing. After years of plotting and scheming to overthrow Conrad IV and Manfred (the illegitimate son of Frederick II) as the rulers of southern Italy, Innocent’s grand papal army suffered a crushing defeat at Manfred’s hands. Innocent IV died shortly after in Naples in the month of December of 1254 A.D.