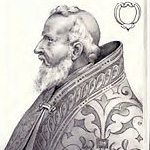 Pope Marinus I was both the Pope of the Roman Catholic Church and ruler of the Papal States until he died in 882. Church leaders at the time considered his papal election scandalous because he was already a bishop, and a bearer of this title typically did not receive an appointment to another episcopal see, including the Bishop of Rome.

Pope Marinus I was born in Gallese, a part of the Papal States. His father, Palumbo, was a priest. Not much is known about the beginning of his life.

Before his papal election, Marinus I had a notable career, which some historians claim was somewhat controversial. Pope Leo IV ordained him a sub-deacon, and then Pope Nicholas I ordained him a deacon. In addition to his appointments as Bishop of Caere, treasurer of the Roman Church, and archdeacon, he served three popes as a legate or personal representative to Constantinople. In 882, Pope John VIII sent him to Duke Athanasius of Naples to encourage him to avoid trading with the Muslims in southern Italy. Pope Adrian II sent him to the fourth Council of Constantinople. This body condemned St. Photius, vevered Patriarch of the Eastern Orthodox Church, for going against the Roman Church and preserving the Eastern Orthodox faith in years prior. When Pope John VIII sent him to Constantinople to smooth over the conflict regarding St. Photius, Marinus I was imprisoned.

On December 15, 882, Marinus I succeeded John VIII as Pope. His papal election was controversial for the time because he already served as a bishop, and a cleric holding this title was not expected to be a bishop of another diocese, much less the Bishop of Rome. Among his acts as pope, Marinus I reversed the stance of John VIII and condemned Photius I. He also held high regard for Alfred the Great, and he absolved the Anglo-Saxons of taxation and tribute. Records also give an account that Marinus I sent a piece of the True Cross to Alfred. Pope Marinus I died in May or June of 884; Adrian III succeeded him.

Quick Facts About Pope Marinus I

Interesting Facts About Pope Marinus I