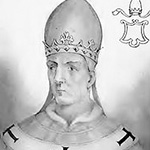 Pope John VIII was the 107th man to hold the highest position of the Catholic Church. His reign was a controversial one. Intense military standoffs and the threat of constant invasion forced the Pope to strengthen the Church’s defenses in Italy. This made the Church very powerful during his reign. Unfortunately, that all ended with his assassination.

Born sometimes around 820, John VIII has a long history with the Church. He was considered to be one of the ablest popes of the 9th century. It’s not hard to see why.

He held many positions before becoming pope. Just before consecration, he elevated to the position of Archdeacon.

He was elected towards the end of 872. While his election was praised by many due to his experience, he also had some opposition. One of his biggest opposers was the cardinal bishop of Porto, Formosus. Formosus would continue objecting to his pontification during his entire reign.

Throughout his papacy, Pope John VIII continually fought to resist the spread of the Muslim faith throughout Sicily and southern Italy. During his childhood, he had experienced the Arab raid against Rome. This experience, alongside the impending threat of the Saracens, led to John VIII forming many alliances.

He allied with the Frankish emperor Louis II. He also supported King Charles II the Bald of France. These alliances united southern Italy against the invasion of Saracens. His entire papacy helped to fortify Rome against the Muslim enemies.

A couple of days after celebrating 10 years as Pope, John VIII was assassinated by his clerics. Several parties allegedly conspired to remove Pope John VIII from the papacy. There are several theories about this motivation of this act. It could have been his failures to stop Saracen raids, the depletion of the papal treasury, or even his displays towards the Byzantines. Whatever the case may be, his assassination severely weakened the papacy, leading to a tumultuous time for the Church.