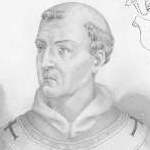 Pope Leo IV served in the role of pontiff as bishop of Rome and Papal States’ ruler from April 10, 847 A.D. until his death in 855 A.D. He has been immortalized for his work building the Leonine Wall that surrounds Vatican Hill and for repairing the substantial damage to churches in Rome caused by Arab attacks on the city. Leo IV also put together an Italian cities’ defensive league to fight the maritime Battle of Ostia in which they defeated the Saracens.

Leo IV was born a Roman. He attended St. Martin’s Monastery located near St. Peter’s basilica for his early education in Rome. In time, Leo caught the eye of Pope Gregory IV who installed Leo as a subdeacon. It was Leo’s predecessor Pope Sergius II who made Leo the cardinal-priest of Santi Quattro Cronati.

The situation in Rome began to dangerously deteriorate in 846 A.D. after a Saracen attack damaged much of the city. With the death of Pope Sergius II, the church conclave chose Leo IV (without opposition) to be the new pontiff in April of 847 A.D. They elected him speedily because of the Saracen attack on Rome the prior year that had inspired fear in the local Roman populace. Pope Leo IV took the reigns of the city of Rome at his consecration in April 10, 847 A.D. The church and newly appointed pope could not wait on the imperial consent to consecrate Leo because the local situation was so dire.

Pope Leo made his first business the saving and rebuilding of the eternal city. He fortified Rome to safeguard it in the event of upcoming attacks that were seen as inevitable and impending. The new pope also rebuilt much of the city including churches that had suffered significant damage from the Arabs.

Among the churches that Leo repaired were St. Peter’s Basilica and the Basilica of St. Paul Outside of the Walls. St. Peter’s needed a new gold covering on its church alter because the Arab raiders had stolen the original one. Leo’s new golden alter was gem studded and weighed fully 206 pounds. After he had restored St. Peter’s, Pope Leo IV sent out an urgent appeal to fight the Arab raiders to the kingdoms of Christendom

Pope Leo did not wait on the lords and kings to come to his aid. He thoroughly repaired the old city’s walls, completely reconstructing 15 of the enormous towers. By the year 849 A.D., Leo had cemented a critical alliance with a number of Greek (Byzantine) cities found in Italy. Using their combined naval forces, his coalition defeated a Saracen fleet that was sailing off the coast of Ostia in Italy.

In 850 A.D., Leo held a Roman synod to crown the Frankish Emperor Lothar I’s son Louis II as the co-emperor in the West. The year 854 A.D. saw Pope Leo IV fortifying the Roman port city of Civitavecchia. This city had frequently presented a tempting target to the raiding Saracens on previous occasions. After the fortifications were completed, the city renamed itself Leopoli out of the citizens’ gratitude.

Where church affairs were concerned, the energetic Leo IV turned his attention to perceived abuses of important church leaders. Leo officially censured Hincmar of Reims (a powerful archbishop) for his role in excommunicating a vassal of the emperor without first gaining approval of the papacy. In 853 A.D., Leo excommunicated the Cardinal Anastasius of San Marcello who would one day become an antipope Anastasius Bibliothecarius.