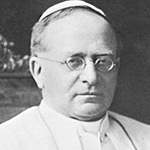 Pope Pius XI was the 259th leader of the Catholic Church and the 11th such individual to claim “Pius” as his papal name. This article will address his upbringing, time working for popes and his time as pope, while also bringing up the basic stat sheet of his papacy and highlight any notable quirks or contributions connected to his person.

Ambrosio was born to Francesco, the owner of silk factory, and Teresa Ratti and grew up among five siblings: Carlo, Fermo, Edoardo, Camilla and Cipriano.

Ratti’s ordination occurred in 1879 and he sought to become an academic. In his time at Rome’s Gregorian University, he earned doctorates on the topics of canon law, philosophy and theology. The years 1882 to 1888 involved him serving a professorship at Padua’s seminary, focusing on paleography-studying Church manuscripts of the past. After his time at the seminary, he moved on to a full-time position with Milan’s Ambrosian Library from 1888 to 1911.

In his time at Milan, Ratti worked on an edition of the Ambrosian Missal and wrote upon the life and texts of St. Charles Borromeo. 19 years into his time at the Library saw him ascend to its chief, where he began a series of programs engineered to restore and reclassify its contents. Pope Pius X would invite him to move to the Vatican in 1911, serving as the Vice-Prefect of its library. Three years later, Ratti would become Prefect.

In 1918, Pope Benedict XV suggested Ratti transition from working in academia to become a diplomat. Specifically, Benedict XV thought Ratti might do well as an unofficial representative of the pope for Poland, a nation that had been newly restored but still under the boots of Germany and Austria-Hungary. In 1919, Ratti’s position in Warsaw was elevated to an official one, serving as its nuncio; he was consecrated in October of that year.

Benedict XV and Ratti frequently had to inform the Polish government that the Church frowned on persecuting Lithuanian and Ruthenian clergy. When the Bolsehvik’s attacked Warsaw, Benedict XV besought the world’s prayers for Poland’s health and Ratti was the sole foreign diplomat who chose to stay as the Red Army reached the capital in August of 1920. On June 11th, 1921, Benedict XV asked Ratti to tell the Polish episcopate not to misuse spirituality toward political gains and to seek peace with its neighbors.

While Ratti had hoped to work as an intermediary between Poland and the Union of Soviet Socialist Republics and was even willing to give his life to the cause of peace, Benedict XV forbid the nuncio from entering the USSR. Ratti’s continued interaction with Russians failed to garner him sympathy with Poland. After Benedict XV sent him to Silesia as a measure of stopping agitation against Polish Catholics, Ratti was asked to leave the country. On November 20, Germany’s Cardinal Bertram announced a papal ban of all political actions by clergymen; German nationalists resented the notion of Ratti’s supervision of local elections.

While Ratti was made Archbishop of Milan in June 3rd, 1921, he would only serve such a role for less than a year. Nine months later, Benedict XV would die and Ratti was elected his successor in 1922.