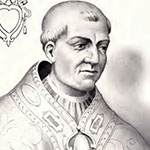 Pope Agatho was the 79th Pope and succeeded Donus as Pope. Before that, he was created a cardinal on March 5, 676 by Pope Adeodatus II. Agatho was probably one of a number of clergymen who had fled to Rome at the time since his birthplace of Sicily was under attack by the Rashidun Caliphate. Besides being a cardinal, Agatho was also the church of Rome’s treasurer.

His reign is notable for two incidents. Soon after Agatho acceded to the papacy, Wilfred of York came to Rome for his help. Wilfred was an English bishop who’d been deposed and expelled by the Archbishop of Canterbury. It was the first time that an English bishop had appealed to the Pope.

The archbishop, Theodore of Tarsus had set about dividing up Wilfred’s diocese and handing the new sees to three new bishops. Pope Agatho convened a synod, or council to look into the matter. The decision was that the diocese should indeed be broken up, but Wilfred was allowed to name the bishops who controlled the parts of it.

An even greater event in Agatho’s reign was the Sixth Ecumenical Council. This Council was in effect from 680 to 681 and came after the Muslim Siege of Constantinople. The council was called to try and heal the decades-long schism between Christians who believed in monothelism and those who didn’t. People who believed in monothelism believed that Jesus Christ had one will but two natures, which is human and divine. People who rejected monothelism believed that Jesus had both a divine will and a human will.

The council was held in Constantinople, and Pope Agatho sent a delegation of legates there along with a letter written he’d written proclaiming the belief of the divine and human wills of Christ. He also had councils on the matter of monothelism held in the West. In the end, Agatho’s letter was accepted, but the Pope died before the decrees could reach him. Still, the schism was healed.

Before this, Agatho got Constantine IV, the ruler of the Byzantine Empire, to reduce or even abolish the taxes newly consecrated Popes had to pay to the imperial treasury.

• Born
Around the end of the 6th century, most likely around 577. Agatho was probably born in Palermo, or Panormus, Sicily. Sicily was part of the Eastern Roman Empire at the time. His exact birthdate is unknown.

• How he died
Since Pope Agatho was extremely old, especially for that time, it is not unlikely that he simply died of old age. On the other hand, Rome was being ravaged by plague at the time of his death, and it’s possible that the plague contributed to his demise.

Pope St. Agatho was considered an exceptionally sweet and kind-hearted man. There’s speculation that he was over 100 years old when he became Pope, which does explain why his reign was as short as it was. He is revered as a saint by both Roman Catholics and the Eastern Orthodox rite. For Roman Catholics, his feast day is January 10, and for Eastern Christians, his feast day is February 20.

Some historians believe that Pope Agatho was a married businessman in the long years before he answered his calling and that his wife agreed to him becoming a monk at the monastery of Saint Hermes in Palermo. His business expertise was one of the reasons he became the Vatican’s treasurer.

Pope Agatho was canonized after a number of miracles were credited to him. Because of those miracles, he was called Thaumaturgus, which basically means “miracle worker.” He’s the patron saint of his birthplace, Palermo and is depicted wearing papal robes and holding a long cross.

Pope St. Agatho’s canonization is considered pre-congregation because it happened before the Congregation for the Causes of Saints was established in 1588 by Pope Sixtus V.