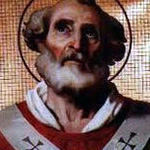 Pope St. Hormisdas was the 52nd pope and is a recognized Catholic saint. Though his name is Persian, he and his father and son were born in Italy under the Roman Empire. This article will explore the fun and insightful facts about Pope St. Hormisdas.

Pope St. Hormisdas’ papacy was largely defined by healing the Acacian Schism and reuniting the Church. The Acacian Schism lasted for an official 35 years between 484 – 519. It represented a split between the Byzantine Empire in the East and the Roman Catholic Church in the West. The Eastern Empire, under Emperor Zeno leaned towards Monophysitism, which was in direct opposition against the Pope St. Symmachus. This division remained at a stalemate due to the contention for the two leaders, Emperor Zeno and Pope St. Symmachus. When Pope St. Hormisdas came to leadership, the course of the issue was redirected.

The Emperor’s synod on July 1, 515 held over two hundred bishops. Despite lofty goals of peace and high attendance, not much was resolved. Both the Acacian Schism and the tensions remained ever-present.

Demands and Their Reception
Pope St. Hormisdas wanted the schism to end but felt several things needed to occur for that to happen. Chief among these was the Emperor’s and Eastern bishops’ acceptance of the Council of Chalcedon and with it the principals of the Western Catholic Church. Anyone exiled due to their original support of the Council of Chalcedon must be allowed to return, and those who persecuted them should be judged.

The Emperor did not take to these terms well. He felt that Pope St. Hormisdas vied to be recognized as the one true authoritative leader of the entire Catholic Church. Thus, the Acacian Schism lasted longer.

A Final Ending to the Acacian Schism
Following the Emperor’s synod and the Pope’s terms of the agreement, more of the same took place, leading to the same extension of division. Emperor Anastasius tried to pit the Roman Senate and monarchy against Pope St. Hormisdas, who kept trying to appeal in writing.

Then, Emperor Anastasius died rather suddenly. His successor, Justin I, quickly agreed to all the Pope’s terms. To commemorate the end of the Acacian Schism, a ceremony was held on March 28, 519.