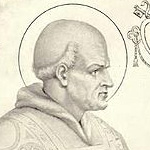 Pope John I was the 53rd Catholic Pope. He held the position briefly from 523 to 526. However, in that short time, he managed to end the Acacian Schism and restore peace with the Byzantine Emperor.

The exact date of Pope John’s birth is unknown. It’s thought that he was born sometime around 470 AD in Tuscany. He grew up in Sienna, which is a city in Tuscany.

He joined the church at an early age, climbing the ranks and eventually becoming cardinal around the year 495. He was in his 20s around this time, making him one of the younger members of the church. Before he became Pope, he accomplished many things as a deacon.

One of the more controversial events of Pope John’s time as a deacon was his support of Antipope Laurentius. He eventually had a change of heart and begged pardon of Pope Symmachus.

John I was elected Pope at an old age. By historian’s account, he was already quite frail by the time his papacy started. Even still, he was ordered by Theodoric the Great to travel to Constantinople.

The pope inherited the Arian heresy, which divided Italy and the Church. Around the time his papacy started, the heretics were treated poorly. Thus, he was tasked with speaking to Byzantine emperor Justin I in an attempt to soften the measures taken against Arian Christians.

Upon his return from Constantinople, Theodoric the Great has John I imprisoned. He believed that the Pope was conspiring with the Byzantine emperor to take his throne. He was imprisoned in Ravenna, where he was severely mistreated and neglected. Pope John I died shortly after his imprisonment.

Quick Facts About Pope John I

Interesting Facts About Pope John I

-Pope John I was honored as a martyr upon his death, eventually earning the title of Saint.
-His feast day is on the anniversary of his death, May 18th.
-The body of Pope John I is buried at the Basilica of St. Peter
-In artwork, John I is often depicted behind bars.
-He was the first Pope to go to Constantinople