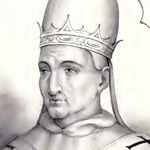 Pope Stephen III was the head of the Catholic Church and prince of the Papal States during the years of August 7, 768 A.D. through his death in early 772 A.D. A Benedictine monk, Stephen served in the pontificate of Pope Zachary within the Lateran Palace. After the death of Pope Paul I in the brutal papal succession chaos that followed, the Roman church officials elected Stephen as legitimate pontiff. He convened a Lateran Council in 769 A.D. in an effort to restrict the nobles’ influence over the elections of the papacy and to address the practice of iconoclasm.

Stephen was born on the Italian island of Sicily of Greek ancestry to a father named Olivus. He arrived in Rome in the papacy of Pope Gregory III. Stephen joined the Benedictine order as a monk at St. Chrysogonus at this time.

When Pope Zachary was the pontiff, the church ordained Stephen to the priesthood. Pope Zachary took an interest in Stephen and retained him in the Lateran Palace. During the reigns of succeeding pontiffs, Stephen attained high offices to the point that he stood at Pope Paul I‘s bedside as he died in June of 767 A.D.

Stephen lived through the subsequent chaos of a series of popes and antipopes following the death of Pope Paul I. Unfortunately for the stability of the papacy earthly rulers had taken an interest in obtaining the papal throne and a bitter struggle ensued. The layman Constantine II was maneuvered into the papal throne by his brother Duke Toto of Nepi.

Meanwhile King Desiderius of the Lombards sent an army to Rome to kill Duke Toto and overthrow the antipope Constantine. Having succeeded in his plots, the Lombard king chose his own pope in a monk called Philip. The monk also subsequently fell from the office quickly.

On August 1st of 768 A.D. Stephen’s turn came to be chosen by the church officials as Pope Stephen III. After his August 7th consecration, the new pope sent word to papal protectors and Frankish monarchs Carloman and his brother Charlemagne that he had become the new pontiff.

Pope Stephen III called for a Lateran Council in April of 769 A.D. and officially deposed the antipope Constantine as he restricted the nobility’s influence over papal affairs and elections. The church council also formally approved the Eastern Church’s tradition of worshiping icons and increased the cardinal bishops’ rights in the Western Church.

The pope later became embroiled in a scheme to stop a proposed marriage alliance between the Frankish rulers and the family of the Lombard king. When Pope Stephen III finally accepted an alliance in 771 A.D. with the Lombards, it caused a backlash in Rome. The leaders of the pro-Frankish party in the Eternal City were murdered.

In a twist of fate, Frankish King Carloman passed away before he was able to march down and exact vengeance for the injustice. This left his brother Charlemagne as the sole ruler of the Franks and King of the Romans.