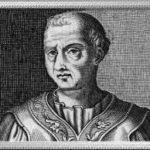 Pope Theodore II was the temporal ruler of the Papal States and the head of the Western church in Rome for a total of 20 days in the month of December in 897 A.D. The reign of this pontiff took place in a time of factional infighting within the Catholic Church that had become embroiled in a period of chaos and brutal violence in central Italy. The principal act of Pope Theodore was to cancel out the recently held Cadaver Synod that Pope Stephen VI had held to cancel the ordinations and acts of Pope Formosus.

The Life and Chaotic Times of Pope Theodore II

Little information has survived on the background of Theodore. History remembers him being born in Rome to a father named Photios. The brother of Theodore served as a bishop as well. Pope Steven V ordained Theodore into the priesthood.

The month of January 897 A.D. was when Pope Stephen VI convened a church meeting that is today known by the name of the Cadaver Synod. His predecessor Pope Formosus had taken the side of Arnulf of Carinthia instead of the ally of Stephen, Lambert of Spoleto, in the contest for who would attain the imperial title. As punishment, Pope Stephen IV exhumed Pope Formosus’ corpse and tried it for coveting the papacy, disregarding canons on appointment of bishops, and perjury.

Pope Theodore II was then elected to succeed Romanus in what has aptly been called among the darkest eras in the history of the papacy. The wounds from the desecration and disinterment of Pope Formosus were seething within the nobility and people of Rome and the Papal States as Theodore II took the papal throne.

Theodore II at once busied himself with the challenge of rectifying the evil of the Cadaver Synod. He convened a synod himself and annulled all of Pope Stephen VI’s decisions. He restored all ordinations and acts of Pope Formosus in the process, returning a great number of bishops and other clergy to their previous church posts.

Pope Theodore ordered the finding of the body of Pope Formosus that had been secretly buried in Portus Harbor by Theodore’s predecessor. Theodore II then returned Formosus’ body to its original resting place in the old basilica of St. Peter.

The Accomplishments and Legacy of Pope Theodore II

Although Pope Theodore II ruled the Catholic Church for less than a month, he still managed to hold the crucial synod that brought healing to the shattered church in Italy. His honorable re-burial of Pope Formosus’ corpse (that Pope Romanus had retrieved from the river to secretly bury) was a watershed moment in the Catholic Church in those dark days.

– How he died
There was great controversy surrounding the Cadaver Synod and its lasting and controversial impacts in Rome and the Papal States. Some historians have suggested that partisans murdered Pope Theodore II for his deeds. He died at 57 years old in 897 A.D. in Rome, and the church buried him in St. Peter’s Basilica.

History has forgotten the precise dates of the papacy of Theodore II, but modern sources mostly concur that he ruled for 20 days during the month of December in 897 A.D.

Pope Theodore II ordered that the body of Pope Formosus be recovered out of the Tiber River and buried again in honor back in St. Peter’s Basilica.

Proponents of Theodore II have called him a friend of peace, beloved by the clergy, chaste, temperate, affable, and one who loved the poor.

Though Theodore died while in office, the precise cause of death remains unknown; writers like Wendy Reardon suggest that foul play was involved.

The tomb of Theodore II suffered destruction in the 1600’s demolition (and rebuilding) of the older St. Peter’s Basilica.