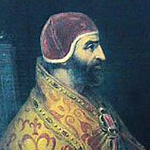 Pope Innocent VI ruled in a time of unprecedented difficulties for the papacy. He was born Étienne Aubert in Beyssac within the Kingdom of France. His predecessor Pope Clement VI was the fourth Avignon Pope, which meant that they were ruling in exile from France instead of Rome their traditional, long-standing Papal seat of power. Innocent VI found himself in a difficult position for most of his time in office as a result of the difficulties of being removed from Rome and influenced by the kings of France.

Pope Innocent’s birth name was Étienne Aubert. Aubert’s father was the local lord of Montel-de-Gelat in the County of Limousin in France. The young man grew up in the Diocese of Limoges the county seat of Limousin in the hamlet Les Monts.

Aubert went on to teach civil law in the southern French city of Toulouse. He received appointments as Bishop of Noyon in the year 1338 A.D. and Bishop of Clermont during the year 1340 A.D. The promotion to cardinal priest came on September 20th of 1342 A.D. By February of 1352 A.D., Aubert had risen to the office of cardinal bishop for Ostia and Velletri. Pope Clement VI promoted him to this position, and Aubert would eventually succeed him.

On December of 1352 A.D., Aubert received the papal office in his chosen name of Innocent VI at the hands of Cardinal Gaillard de la Mothe following the 1352 papal conclave. One of his first acts in office was to revoke an agreement that had been signed earlier declaring that that the pope was inferior to the College of Cardinals. In his early reign as pope, Innocent VI proceeded to attempt to make much-needed reforms of the papacy that he was ruling in exile in Avignon, southern France.

These reforms included the running of the day-to-day church affairs. Using the papal legate Cardinal Albornoz and an associate Rienzi, Pope Innocent VI attempted to re-impose order to the chaos running rampant in Rome in the personal absence of the popes.

An important milestone in the pontificate of Pope Innocent VI happened in the year 1355 A.D. The Holy Roman Emperor Charles IV had his coronation in Rome with the permission of Innocent. Emperor Charles did not stay long as he had sworn an oath that he would leave the city of Rome immediately following the ceremony.

The pope faced dramatic opposition in his efforts, yet he still managed to have some large scale accomplishments. Thanks to the efforts of Pope Innocent VI, France and England signed the Treaty of Brétigny in the year 1360 A.D. Another interesting development was the offer from Byzantine (Eastern Roman) Emperor John V Palaeologus to recognize the authority of the Western Church and pope as supreme in exchange for help against rival John VI Cantacuzenus. The pope and his limited resources were preoccupied with needs much closer to home at the time, forcing him to turn down the historic offer.

Pope Innocent VI struggled with finances for the majority of his papacy. Wealth had been amassed by earlier Popes John XXII and Benedict XII, yet this was squandered in the lavish papacy of Innocent’s predecessor Pope Clement VI. It forced Pope Innocent VI to take drastic and humiliating measures to save money.

He found himself reducing the chapel staff down to eight from the prior 12. Most embarrassing of all, the pope had to sell off art works instead of being able to pay to commission them. The pope found himself complaining that he was broke at one point.

Ongoing wars in Italy sapped resources and overshadowed much of Pope Innocent VI’s efforts and pontificate. He also had to oversee the recovery of the city of Avignon as it struggled with the Black Death plague. Between the two trials, Innocent found himself impoverished by the year 1357 A.D. Despite one instance of cruelty in dealing with the Fraticelli, Innocent is remembered mostly for showing mercy and practicing justice.

– Born – in either 1282 A.D. or 1295 A. D.
– Birth Name – Étienne Aubert
– Died – September 12, 1362 A.D.
– How he died
Pope Innocent VI died of old age in relative peace in Avignon. He was aged somewhere between 67 and 80 as historians are not precisely sure whether he was born in 1282 or in 1295. The 10 year ruling pope died frustrated by the poverty in which he found his papal state despite his best efforts to cut costs and sell off art treasures.

Pope Innocent VI turned out to be the fifth pope who lived in the exile in Avignon. Of the Avignon popes, he was the only one who had the pontifical name Innocent.

Innocent VI complained of being poor.

He found a critic in St. Bridget of Sweden who described him as persecuting fellow Christians.

Visitors to France today are able to see his tomb in the Carthusian monastery found in Villeneuve-lès-Avignon.

The pope was a patron of reading and writing.