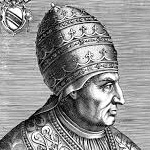 Pope Innocent VII was the 204th man to rule the Catholic Church and Papal States. His reign was a short one, lasting a little over two years. In that time, the Pope could not heal the Church during one of its most challenging periods. In fact, his actions resulted in even more turmoil and controversy.

As a result, his reputation as an otherwise virtuous Pope was marred with contention and failure.

Pope Innocent VII ruled during the Western Schism. The Catholic Church was split, with two men claiming to be Pope. Pope Innocent VII held the Roman Papacy while his rival, Antipope Benedict XIII, claimed the Avignon Papacy. Despite his minimal efforts, Pope Innocent did nothing to suppress the schism.

Before his pontification, Pope Innocent VII was known as Cosimo de’ Migliorati. Migliorati was born to a simple family in Sulmona. He went on to study civil and canon law, earning him some recognition within the Church. He eventually went to Rome, where Pope Urban VI took him into the Curia.

Migliorati slowly climbed the ranks of the Church and humbly served many positions. One of them was the papal collector to England, a role he served for about a decade.

Cosimo de’ Migliorati eventually became Bishop of Bologna in 1386. He served in this position at a very tumultuous time in the city’s history. His work there led to another promotion just a year later. Pope Urban VI made him Archbishop of Ravenna.

Later, Migliorati was made Cardinal of S. Croce in Gerusalemme by Pope Boniface IX. He held onto that position for a few years, ultimately becoming a legate to Lombardy and Tuscany before his pontification.

Pope Innocent VII’s rise to the papacy was an interesting one. Upon the death of his predecessor, cardinals attempted to heal the schism. Delegates of the Antipope Benedict XIII were in Rome at the time. The cardinals asked if the Antipope would abdicate if they did not hold an election. The delegates said Benedict XIII would never abdicate, so they went ahead with the election process.

Upon his election, riots broke out. Lead primarily by the Ghibelline party, the riots were an insurrection that challenged his papal reign. Luckily, the insurrection ended quickly thanks to the actions of King Ladislaus of Naples.

In a move to show gratitude, Pope Innocent VII made King Ladislaus the “Defender” of the Church. He also promised Ladislaus that he would not negotiate with the Antipope unless the Antipope recognized the King’s claims to Naples.

Ladislaus’s protection would prove to be useful later. Unfortunately, his assistance would not help the reputation of Pope Innocent VII.

The Pope elected his nephew as the captain of the papal militia. Wholly unqualified, his appointment immediately created controversy and talks of nepotism. This move would cause even more strife when his nephew, Ludovico Migliorati, had eleven Roman partisans murdered in grisly fashion.

The deaths caused such an uproar within Rome that Pope Innocent VII had to flee. His attempts to assemble a general council to deal with the schism in Rome were thwarted, and he had no choice but to leave the city for his own safety.

King Ladislaus and his troops quelled the riots and brought calm to the city. Romans realized that Pope Innocent VII had nothing to do with the murders, so they recognized his Papal authority upon his return to Rome.

Later, Pope Innocent VII did attempt to resolve the Western Schism. However, he did not trust Antipope Benedict XII. Furthermore, he was not receptive to the thought of resigning alongside Benedict XII to promote peace within the Church. As a result, Benedict XII painted him as an unwilling participant and ruined his reputation even further before his death.

-Before he climbed the ranks of the Church, Pope Innocent VII was praised for his academic achievements. He studied both civil and Canon law, eventually teaching Perugian and Padua.
-One of his teachers and sponsors was Giovanni da Legnano, the famed jurist who supported Pope Urban VI during the outbreak of the Western Schism.
-Pope Innocent VII was elected unanimously by only eight cardinals.
-He was embroiled in controvery due to his appointment of Ludovico Migliorati as captain of the papal militia. Migliorati was the Pope’s nephew. Highly unqualified for the position, many viewed the appointment as an act of nepotism. Matters got worse when Migliorati had several Romans massacred.
-The Pope tried to convene a general council in Rome. But the uproar over Migliorati’s heinous acts suppressed his efforts before they even began.
-Upon his death, Pope Innocent was in the midst of planning a restoration for the Roman University. But like his attempt to heal the Schism, nothing came to fruition.