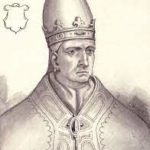 He was born in Savoy, France, which at the time was known as Chevron. His original name was Gérard de Bourgogne, or, in English, Gerard of Burgundy. Nicholas II was canon at Liege. He became Florence’s bishop in 1046. During that time, Nicholas II worked to successfully restore canonical life among the clergy.

The ascension of Benedict X, who became pope in 1058, caused an uproar. There were many accusations of rigging the vote. Several cardinals who led the charge found themselves forced to flee to Rome for challenging the new pope.

Pope Gregory VII, born Hildebrand of Sovana, was in Germany when he chose to oppose the election of Benedict X. It was Gregory VII who gathered support for Gérard de Bourgogne to take Benedict X’s place. A number of cardinals unhappy with the Benedict X papacy met at Siena in 1058. There they elected Gérard and there Gérard was given the name Nicholas II.

One of the new pope’s first battles was dealing with the many issues raised by the very circumstances surrounding his election.

Holding council in 1059 in the Lateran at Easter, a decree was issued by Nicholas II on papal elections in hopes of ending the conflicts associated with Benedict X’s election. With the issuance, nobility would no longer interfere in elections, and any successions were to be regularized.

Nicholas II created a council of seven cardinal bishops. Their consignment was to choose suitable candidates and work with other cardinals in the process. It would then be up to the clergy and citizens of Rome to vote, with the emperor recognizing and confirming the decision.

The radical declaration created tension between the German court and Rome.

This reform, initiated by Nicholas II, did not just aim to prevent political bias and corruption in papal elections. It maintained a gradual process for establishing the church’s independence.

The conflict in Patarenes concerned Nicholas II. This eleventh-century movement demanded clergy and ecclesiastic government reform within Milan and its province. The movement wanted support of Papal sanctions against clerical marriage and simony. Individuals within the movement were called patarini, patarines or patarenes. The movement stood out for its association with urban unrest in Milan between 1057 and 1075.

Nicholas sent legates (members of the clergy, usually cardinals, who represented the Pope) to work on a resolution, to mediate between Milan’s archbishop and clergy, and with the Patarenes. The meetings resulted in Archbishop Wido agreeing to the legates’ terms on the issues in question. This was an exciting win for the papacy.

Under Nicholas II’s counsel, the church was redefining the manners of the clergy, marking a great achievement in the papacy’s history.

Other Facts about Nicholas II