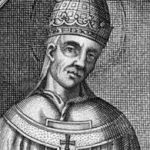 Pope Anastasius II was the 50th pope and the second to choose the name Anastasius. He served as pope for just short of two years and has the nickname of the Failed Arbitrator. This article will help readers learn more about Pope Anastasius II.

Before the Papal Election

Historians believe that Anastasius II was born in Rome circa 445, which would make him 51 when he became pope. He grew up with a deep connection to the church because his father was a priest. Before accepting the position, Anastasius served as a cardinal and a cardinal deacon appointed by Pope Gelasius II. Several members of the Church brought forth his name during the papal election. Church members officially voted to make him pope the next week. He took the position less that one week after the death of the previous pope.

Before becoming pope, Anastasius II was aware of a movement called Acian schism. This occurred due to a widening gap between the eastern and western churches. Prior popes excommunicated leaders and other men who followed the new branch. When Gelasius I passed away, Anastasius II became pope in part because of his plans to reunite the churches. He met with a Byzantine emperor of the same name and made plans to go forward. Those in Rome disagreed with his plans and made steps to separate from him, going so far as to avoid the communion he offered.

Pope Anastasius II only served as pope for less than two years. Though his followers hoped that he could unite the Church again, there was too much division at the time. His death led to even more separation. While his followers put one name forth as pope, his opponents wanted Symmachus to become the next pope. That group gained a majority in the next election and voted Symmachus as the new pope. Anastasius II served as pope for 5,717 days and was interned in St. Peter’s Basilica.