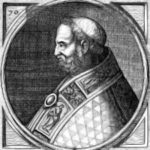 Pope Boniface V was the 69th pope and the fifth to use the name, Boniface. History remembers him as the pope associated with bringing Christianity to England and converting locals. This article includes some basic information on Pope Boniface V.

As with other popes from this time, there isn’t much information available about his early life. Born to the Fuminas family, he had the first name Bonifacius. He was appointed the cardinal-priest of San Sisto in 618 and appointed a full cardinal later in the year. Boniface was born in Neapolis, which is now part of Naples. Though some records show him as Roman, he was Neapolitan.

Following the death of Pope Adeodatus I, the Church spent nearly a year looking for the next pope before selecting him. He chose the name Boniface in honor of his birth name. Almost immediately after becoming pope, he faced issues regarding Eleutherius who was the Exarch of Ravenna. He attempted to take control of Rome for his empire and marched with his troops to the city. Before they could arrive, he died due to rebellion from his forces.

Pope Boniface V was interested in the work missionaries did in England at the time. While others worked on converting the northern part of the nation, the pope focused his attention on Canterbury. He issued a decree that stated Canterbury was a See and that Rome would protect the city center.

History credits Pope Boniface V with the idea of churches being a sanctuary for those in need. An official decree released during his life stated that anyone could turn to a church for help. Another decree involved the belongings of martyrs. It stated that monks and other holy men could not give those relics to others. An early biography of popes claimed that Boniface V was a mild man who both honored and respected his fellow clergy. When he passed away in 637, he was interned the same day in Rome’s St. Peter’s Basilica.