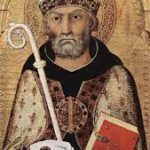 Pope Boniface I was the 42nd Pope and became one of the most controversial for the contested nature of his election as the Bishop of Rome. There is little information about the early life of Pope Boniface I with some contemporary historians detailing his citizenship as Roman with his role in the Church growing from the 4th-Century until his election in 418. There was a major controversy over the election of Boniface as Pope with followers of Eulalius who elected their favorite as an Antipope. Pope St. Boniface only remained in power as Pope for four years until his death in 422.

Pope St. Boniface I is one of the most mysterious Popes in history with little information available about his life before arriving in Rome. Some historians writing at the time of his election record him as a Roman who was ordained by Pope Damascus I and spent time as a member of the inner circle of Pope Constantinople.

Perhaps the most famous aspect of the Papacy of Pope St. Boniface I is the fact he faced an antipope throughout the early years of his time in Rome. The death of Pope Zosimus on December 26, 418 prompted the arrival of the main contenders for the Papacy in Rome. Although Antipope Eulalius was elected as Pope by his followers and some clergy. On December 28, 418 Boniface was also elected by his followers and taken to St. Peter’s Basilica. Although Eulalius was originally identified as the Pope this would wain over time with Pope St. Boniface seen as the true Pope and Eulalius the Antipope.

Discipline was the Focus of Pope St. Boniface

After the more lenient and forward-thinking rule of Pope Zosimus that was marked by the relaxing of some Church rules, Pope St. Boniface I is seen as the Pope who returned the discipline to the Catholic Church. Zosimus had been happy to hand over many of his powers to some Bishops in Western Europe, a decision that was reversed by Boniface I as he returned Rome to full dominance.

Among the many acts of Pope St. Boniface I was the decision to reverse the altering of the rules created by Pope Soter that had restricted the touching of sacred linens and burning of incense by females. The Pope would overcome a potential uprising by his Bishops who were unhappy with his decisions.

This meant the Eastern Church was closely watched by Pope St. Boniface I and allowed him the chance to work closely with his ally, Bishop Rufus of Thessalonica.