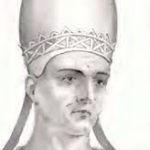 Pope Leo V was born in a dark and dangerous time for the papacy in the turbulent days of the late 800s to early 900s. A native son of Priapi, he grew up in the small settlement that lay in the Ardea district. Leo V served in a day when the pontiff held little political authority.

Pope Leo Before and During His Brief Time in the Papacy

The historical and Catholic church records are not completely certain when Leo V was born or what his early life was like. At the time of his selection to be the head of Western Christendom, he served in a church that lay outside the city of Rome. It was unusual at this time that he was not one of Rome’s cardinal-priests.

A chronicler of Leo’s day named Auxilius wrote that Leo manned “the rudder of the Holy Roman Church” a mere 30 days. Auxilius also called him a man of God who led a praiseworthy life of exemplary holiness. The only act of his brief two month long papacy that survives to today’s time is that Pope Leo V issued a special Papal Bull. He declared that the Bologna canons were exempted from their required taxes. Unfortunately nothing more is known of his time in the papacy.

The Downfall of Pope Leo V

Pope Leo V had not been in his new office as pontiff for even two months when the Cardinal-Priest from St. Damasus, Christopher, arrested Leo and threw him in prison. Christopher quickly took over papal seat as an anti-pope, but he did not last long. Sergius III quickly replaced the usurper Christopher, who found himself in prison alongside Leo V.

One source from the time claims that Sergius did not leave either of the two dethroned Popes Leo or Christopher in prison for long, opting to show them so-called mercy by executing them both. Another tradition argues that Leo instead died naturally while imprisoned or under house arrest somewhere in a monastery.

Pope Leo V died in one of two ways according to several sources of the day. He might have been murdered by the man who imprisoned him the antipope Christopher, or instead he could have been killed by Christopher’s own successor Pope Sergius III. Another historical tradition states that Leo died of natural causes, either while in prison or after being sent away to a monastery.