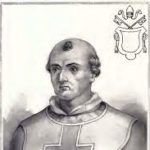 Pope Benedict VI was pope from 973 to 974. He was the 134th pope and had both Italian and German roots. This article will look at his murder and what he did as pope.

Known as Benedictus following his birth, the future pope was both German and Italian. Though his father later moved to Rome and became a Roman citizen, he was born in Germany and belonged to the Hildebrand family. Benedictus grew up in Sub Capitolio, which was one of the oldest districts in the city. After receiving his calling and taking his orders, he served as the cardinal deacon of Saint Theodore, which is a Roman church from the sixth century.

Pope John XIII had a difficult time as pope due to issues between Roman citizens and Otto I, which some historians believe contributed to his death. Imperial followers of the Church elected Benedictus as the next pope. Though the papal election took place in September of 972, it wasn’t until January 19 of the following year that he took the position. It took several months before Otto I agreed to the appointment. As he was the Holy Roman Emperor at the time, he had the final say on the pope.

The aristocracy in Rome did not approve of Pope Benedict VI. They believed that he would side with Otto I over the needs of the locals. He worked with several churches and monasteries to renew the privileges they lost in the past. The pope also protected a monastery in Blandin at the behest of King Lothair of France. One of the only papal bulls issued during his life that still exists is one that made several men vicars.

Almost immediately after his election, Otto I passed away and Otto II gained control. Those opposed to Otto II came together to depose the pope while the ruler was busy in Germany. They took him away in June of 974 and moved him to the Castel Sant’Angelo. He was imprisoned there for several days at the word of Franco Ferrucci. Ferrucci was a cardinal deacon and the main choice among Germans for the papal role. It was Ferrucci who named Boniface VI the next pope. Otto II sent men to demand that Boniface return the papacy to Benedict VI. In response, Boniface ordered the death of Benedict. He died after another pope strangled him in June.

*The date of his birth is unknown but was likely in 925.
*He was one of several popes with the birth name Benedictus.
*The pope died in June of 974.
*He was murdered while imprisoned in Rome.
*Pope Benedict VI was elected in 973 and became pope on January 19.
*His papacy ended in June of 974.
*Benedict VII was his successor.

*Though Boniface VII became the next pope, the Church regarded him as an antipope. He was overthrown, which made Benedict VII the next rightful pope. Boniface VII was the antipope for only 30 days.
*Some records indicate that Benedict VI was no longer pope when he was murdered. Church records show that he remained pope up until his death.
*It took nearly three months for the Church to select the next pope after his death, which includes the month that Boniface VII held the position.
*A bishop in Pilgrim held a letter allegedly written by the pope after the bishop wrote and asked him for help. Most historians today believe that the document was a forgery.
*There is some evidence that indicates the papal bull credited to Pope Benedict VI is not real. This bull named new vicars to positions in the northern and southern suburbs of Rome.