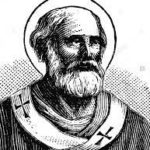 Pope St Benedict II was born Benedetto Savelli around 635AD. He was a typical Roman citizen who served as an altar boy in his youth. He later enrolled at the Schola Cantorum at a young age and earned a reputation for a deep understanding of the scriptures and talent for liturgical chanting.

Benedict served as a priest for several years and set a good example by being humble, empathetic, and generous. He was a student of the papal choir school and rose through the ranks to the position of a priest. Benedict was excellent in liturgy, which is an important part of Roman Catholic worship rituals.
Benedict served as a:
• Bishop for 8 years
• Cardinal for 2.5 years
• Pope for 1.8 years

Benedict was voted in as the pope immediately after Leo II died in June 683AD. He waited for almost one year before consecration because there was a delay in obtaining the endorsement of Constantine IV Pogonatus, the Byzantine emperor. The hiatus motivated him to request the Roman emperor to decree that a pope’s ascension will not be subject to confirmation by the emperor.
Even though the request was granted, future popes stuck to the tradition of seeking imperial confirmation. Benedict also renovated several Roman churches and supported priests in their service and tended to the poor. Benedict fell ill in April 685AD and died within weeks. His remains were interred at St. Peters Basilica on 8 May 685AD.

According to catholic historians, Benedict’s election is evidence of the warming relations between Rome and the Byzantine Empire. Experts note that all his predecessors were Greek-speaking Sicilians while he was a local raised in the Vatican tradition. Rome was growing in confidence following the reconciliation agreement between Emperor Constantine IV and Agatho.

Further evidence of thawing relations can be found in the emperor’s willingness to grant the request for papal appointments to be confirmed without endorsement by Constantinople. The emperor decreed that his Italian representative, the Exarch of Ravenna, could endorse new popes. This decree allowed future popes to assume office immediately, even though they maintained the tradition of seeking Byzantine endorsement. The emperor then proceeded to present locks of his sons’ hair to Rome to symbolize that he had allowed the pope to adopt the princes as his sons.

Benedict supported the decrees pronounced by the Third Council of Constantinople and made frantic attempts to outlaw monothelitism through his agent, Macarius, the former patriarch of Antioch. The King Ervig of Spain heeded his call and summoned a convention that reached several resolutions. The Council of Toledo ratified the anti-Monothelite decrees in November 684AD, though the pope rejected two provisions in the Apologia presented to him by Julian of Toledo.
Among the resolutions was the decree to bring all the heretics to Rome for punishment. However, Benedict was lenient and instead arranged for their re-education in orthodox theology. After ratifying the provisions, Benedict offered Macarius, a chance to reform and resume office. (Macarius was a renegade bishop and leader of the Monothelites.) However, he turned down the offer and continued to proselyte in the East.

• He was a student of theology and well versed in the scriptures.
• He was a talented liturgical singer.
• Benedict put a lot of effort towards the suppression of monothelitism, which suggested that Jesus did not have a divine nature.
• Benedict renovated several Roman churches.
• His most notable contribution was successively petitioning Emperor Constantine IV to decree that popes could take office without imperial confirmation.
• Benedict decreed that Wilfrid be reinstated as the See of York, a title he had been denied in 677AD. This directive was fulfilled in 686AD.